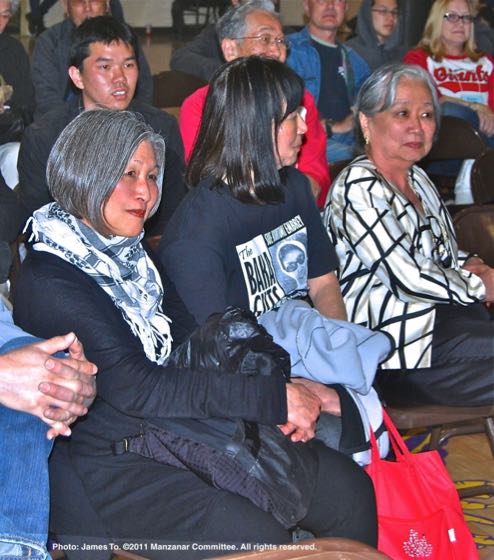 Time of Remembrance observances are coming up in another few weeks, a good time to do something to assure, “never again.”

This year, in the context of the National Defense Authorization Act that provides for indefinite military detention of the accused, we need to be more vigilant than ever, especially with two companion pieces of legislation introduced this session of Congress. The two bills, S. 1698 and HR 3166, resurrect the spectre of the little-known government denationalization and deportation program that the Department of Justice used to strip nearly 6,000 Americans of their U.S. citizenship while they were imprisoned at the Tule Lake concentration camp during World War II.

On July 1,1944, Public Law 405, that originated from racist California legislators and drafted by then U.S. Attorney General Francis Biddle, was signed into law by President Roosevelt. This law, known as the 1944 Renunciation Act, led to thousands of Japanese Americans imprisoned at Tule Lake to be categorized as “enemy aliens” no longer protected by the Constitution. The government prepared to deport these so-called “disloyals” and “troublemakers” to Japan when the war ended.

The denationalization program was one of World War II’s extreme instances of the abuse of power, used against American citizens who protested the denial of due process, and the injustice of their incarceration in America’s concentration camps. Yet, the government’s mistreatment of Japanese American “troublemakers,” and the unprecedented program to purge thousands of American citizens through the denationalization process, is unknown to most Japanese Americans, and to the general public. The victims who renounced their devalued citizenship were silenced, stigmatized by other Nikkei, and marginalized by the perpetual government-created loyal/disloyal paradigm that defined protest as disloyalty. The Army and the Department of Justice suppressed details of their maneuverings, thus avoiding scrutiny and subsequent legal challenges to their actions.

The Enemy Expatriation Act, S. 1698 (Lieberman) and its companion bill, HR 3166 (Dent) await action in Congress. These bills would enable the government to strip American citizens of their U.S. citizenship if they are accused of “engaging in or purposefully and materially supporting hostilities against the United States.”

The bills are also being described as closing a loophole in the National Defense Authorization Act, signed into law on the eve of 2012 by President Obama, that provides for indefinite military detention of the accused. The denationalization legislation could be applied to U.S. citizens who are indefinitely detained, stripping away their rights as American citizens and enabling their treatment as foreign enemy combatants.

These companion denationalization bills are an assault on our nation’s belief in civil liberties and civil rights, threatening unpopular groups with the same type of mistreatment that dissident Japanese Americans experienced while imprisoned at Tule Lake.

During this time when Japanese Americans and other civil rights advocates are planning Day of Remembrance programs—memorializing the 1942 Presidential removal order Executive Order 9066 that banished 110,000 persons with Japanese faces to desolate concentration camps, stripped of their rights, their humanity and their dignity—we must not close our eyes to what is happening again.

Unless we wish to render the phrase “never again” meaningless, we must continue speaking out to prevent other human and civil rights travesties like Executive Order 9066, the Renunciation Act of 1944, and streamlining the deportation of people who are deemed “troublemakers.” More than ever, we need to renew our efforts at education and advocacy.

Takei is CFO of the non-profit Tule Lake Committee. For the past decade, she has researched and written about Tule Lake’s segregation history, and has served as an advocate and fundraiser for the Tule Lake concentration camp site.

A Bill To add engaging in or supporting hostilities against the United States to the list of acts for which United States nationals would lose their nationality.

Be it enacted by the Senate and House of Representatives of the United States of America in Congress assembled,

This Act may be cited as the “Enemy Expatriation Act.”

(C) by adding at the end the following: “(8) engaging in, or purposefully and materially supporting, hostilities against the United States.”; and

(2) by adding at the end the following:

“(c) For purposes of this section, the term ‘hostilities’ means any conflict subject to the laws of war.”