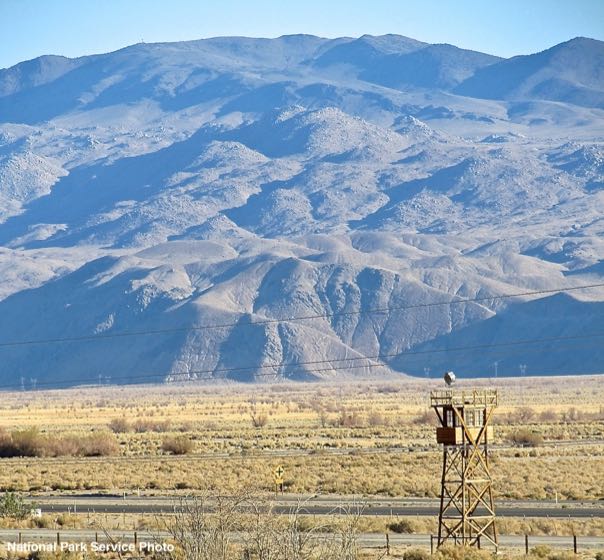 LOS ANGELES — The Manzanar Committee denounces the decision by the County of Inyo Planning Commission to approve the 2013 Renewable Energy General Planning Amendment (REGPA) to the County’s General Plan, which would open the door to the construction of large-scale, industrial-grade renewable energy facilities in the County, including an area within the viewshed of the Manzanar National Historic Site.

The 2013 REGPA, which now goes to the County’s Board of Supervisors for final approval, defines Renewable Energy Development Areas (REDA) where large-scale renewable energy generating facilities could be built in Inyo County.

The Manzanar Committee opposes the 2013 REGPA because it would allow the construction of such facilities throughout a huge swath of the Owens Valley, a large portion of which would be visible from the Manzanar NHS. Such facilities within Manzanar’s viewshed would destroy the ability to teach current and future generations about how the desolation of the area was a key factor in the decision to build one of the ten American concentration camps at Manzanar during World War II, not to mention how the desolation of the area was used to control the behavior of the 11,070 Japanese Americans who were unjustly incarcerated there, instilling in them a sense of despair and hopelessness.

The Manzanar Committee also opposes the 2013 REGPA because allowing large-scale renewable energy facilities to be built in the Owens Valley, forever marring its beauty, makes no sense, given that Inyo County’s economy is based on tourism. Furthermore, such facilities would not contribute positively to the local economy because they do not create a significant number of permanent jobs—the economic benefit for the County would be inconsequential.

The 2013 REGPA does not affect large-scale renewable energy development on land owned by the Los Angeles Department of Water and Power (LADWP), as the County has no authority over them in such matters. As such, it has no impact on LADWP’s Southern Owens Valley Solar Ranch, a proposed 1,200-acre solar energy generating facility that would be built on LADWP-owned land, adjacent to the Manzanar NHS. However, by including such a large portion of the Owens Valley as a REDA, the 2013 REGPA would open other lands in the area to such development as well, posing an even greater threat to Manzanar.

At their February 26 meeting, attended by an overflow crowd at the County’s Board of Supervisors meeting room in Independence, California, more than thirty people addressed the Planning Commission, with just one supporting the 2013 REGPA. But after more than three hours of public comment, with virtually no deliberation, the Commission voted 4-1, with Commissioner Bill Stoll the lone dissenter.

Along with former incarcerees Kanji Sahara and Hank Umemoto, Gann Matsuda represented the Manzanar Committee at the meeting.

“We are absolutely outraged, not only by the Inyo County Planning Commission’s apparent total lack of understanding of the issue before them, but also by their rubber stamping of this horribly flawed amendment,” said Matsuda. “They were clearly in over their heads. Based on the questions the Commissioners asked, and the comments they made, it was blatantly obvious that they were utterly confused and totally unprepared to consider this matter. They clearly did not understand the amendment at all, yet they ignored overwhelming opposition and approved it.”

“The Planning Commission disregarded and disrespected their constituents, as well as those of us who made the long drive from Southern California to explain how the amendment green lights large-scale renewable energy development that would intrude on the viewshed of the Manzanar National Historic Site, on top of what the LADWP has proposed,” added Matsuda. “Their actions were a gross display of negligence, arrogance, unprofessionalism, and perhaps incompetence.”

The Manzanar Committee also supports organizations and residents in the Owens Valley who contend that the 2013 REGPA does not reflect earlier community input which heavily opposed the amendment.

“The will of the people of Inyo County is being ignored by their County government,” Matsuda noted. “One Inyo County resident after another who attended the earlier public meetings where input into the amendment was received told the Planning Commission that the 2013 REGPA does not, in any way, reflect the overwhelming opposition that was expressed at those meetings.”

“We stand with the Big Pine Paiute Tribe, the Lone Pine Paiute-Shoshone Tribe, the Owens Valley Committee, and others in Inyo County in their demand that the Inyo County Board of Supervisors truly represent their constituents when they consider the 2013 REGPA, and that includes protecting the Manzanar National Historic Site from intrusions into its viewshed,” Matsuda added.

The Inyo County Board of Supervisors is expected to consider the 2013 REGPA on March 18.

“The Inyo County Board of Supervisors must recognize that the 2013 REGPA is horribly flawed,” said Matsuda. “We call on them to protect the County’s economy, its residents, and the Manzanar National Historic Site, by preventing large-scale renewable energy development in the Owens Valley.”

For further details, please refer to our comments to the Inyo County Planning Commission regarding the 2013 REGPA: Manzanar Committee Calls On Inyo County To Shut Door On Large-Scale Renewable Energy Facilities In Owens Valley.

The Manzanar Committee is dedicated to educating and raising public awareness about the incarceration and violation of civil rights of persons of Japanese ancestry during World War II and to the continuing struggle of all peoples when Constitutional rights are in danger. A non-profit organization that has sponsored the annual Manzanar Pilgrimage since 1969, along with other educational programs, the Manzanar Committee has also played a key role in the establishment and continued development of the Manzanar National Historic Site. You can also follow the Manzanar Commitee on Facebook, Twitter, Pinterest and YouTube.

LEAD PHOTO: Looking east from the visitor’s center at Manzanar National Historic Site. The floor of the Owens Valley, along with the Inyo Mountains in the background, are visible. But this view could be destroyed by large-scale renewable energy generating facilties if the County of Inyo opens the door to that kind of development in the Owens Valley. Photo courtesy National Park Service.