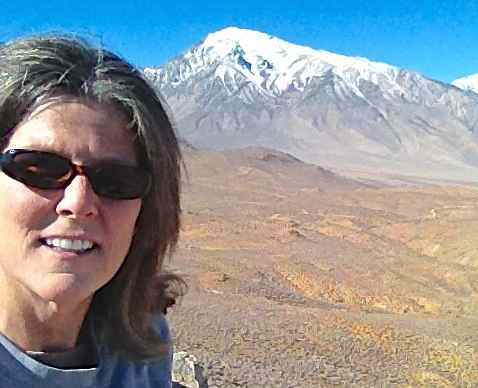 Here’s another view from the Owens Valley, from Spotted Dog Press, about the threat to the Manzanar National Historic Site and the rest of the Owens Valley from large-scale renewable energy development. That threat is two-fold: the Los Angeles Department of Water and Power’s proposed 1,200-acre Southern Owens Valley Solar Ranch, which would be built near Manzanar, and Inyo County’s proposed 2013 Renewable Energy General Plan Amendment, which would open the door to even more of that same kind of development in the Owens Valley, including the area that would intrude upon Manzanar’s viewshed.

There is big money in renewable “green” energy, particularly a few years ago, when these projects were receiving billions of dollars in federal subsidies.

There are over 37 million people living in California. We found an old press release for PG&E/BrightSource’s Ivanpah solar project in the Mojave Desert that estimated the project’s cost at $2-3 million to provide power to 375,000 homes. At least three-quarters of that project was subsidized with tax dollars. Recently, we read it is currently providing power to 140,000 homes, whose owners are still paying standard rates. For the sake of argument, we’ll say there are four people per household for a total of 560,000 people. That’s still a long way from 37 million-plus and a lot of desert land that must destroyed to make up the difference. By comparison, little of this money is being directed towards research to develop new technologies with a smaller environmental footprint.

How can those of us who love the open and undeveloped spaces of Inyo County, where the Great Basin meets the Upper Mojave Desert, fight that? Inyo County is one of the most beautiful places on the planet, but when money talks, beauty walks.

Last month, we took a field trip to El Dorado County on the west side of the Sierra, between Shingle Springs and Lake Tahoe. We visited a community where the homes had easily accessible solar voltaic panels in their yards, harnessing the power of solar, paying for most of their electricity. That was solar done right. While our state is passing laws on renewable energy, what about a law that requires developers to include solar systems in all new construction?

When we first became aware of plans to build a 200-megawatt solar photovoltaic facility across from Manzanar National Historic Site in November 2013, we realized that a project of this size would not only be visible from Manzanar (where the existing landscape is an important component of the site’s history) and that geographic segment of the US 395 corridor, but would also be visible from Mount Whitney and the front peaks along the scarp of the Sierra Nevada. We publish books about Inyo County that include Climbing Mt. Whitney, Desert Summits: A Climbing and Hiking Guide to California and the Southern Nevada and Ansel Adams’ Born Free and Equal: The Story of Loyal Japanese Americans at Manzanar. We believe that our readers, most of them visitors to Inyo County, will have their unique outdoor experiences negatively impacted by the visual presence of renewable projects throughout the Owens Valley in the expanded area now proposed in the Renewable Energy General Plan Amendment (REGPA) currently on the Inyo County Board of Supervisor’s agenda for a vote.

Is this our future, to accept the visual disruption of our precious landscapes and the proven disturbance to wildlife, especially migratory birds using the Pacific Flyway? Is this the new face of America’s public lands?

In February, the Inyo County Planning Commission approved REGPA, an in-house study produced by the Inyo County Planning Department with a grant from the CEC. Approximately ten percent of the County’s lands, most of it public, will be set aside for renewable energy development—wind turbines, solar projects (and yet unforeseen renewable technologies), not only in Owens Valley, but also the untouched Great Basin and Upper Mojave sanctuaries of Deep Springs and Panamint Valley.

Inyo County measures 10,227 square miles, so 1,023 square miles have the potential for development. The destiny of the Great Basin and Upper Mojave Desert lands that fall within Inyo County’s borders is now in the hands of the Inyo County Board of Supervisors. They must vote to approve the amendment to the general plan.

The Inyo County Board of Supervisors can make a difference, by rejecting the amendment, but will they? If these projects bring a stable revenue source to the County, they will most certainly approve it. It is difficult to say no when state law requires 33% of electricity come from renewable energy sources by 2020, when so much money is at stake and utility companies are knocking at the door.

Second to the Los Angeles Department of Water and Power, Coso Geothermal is the second largest taxpayer to Inyo County. The beauty of Coso Geothermal, is that it’s not visible from the routes used by most visitors and recreationists to Inyo County. The only hint of its existence is a wisp of steam along the ridge of the Coso Mountains, as seen from Dunmovin or the Coso Junction rest area on US 395, or from Fossil Falls to the south. Low impact. Low visibility.

If you’ve not done so, we suggest you read the letter from Cindy Kamler, Executive Director and Founder of Eastern Sierra Wildlife Care at http://www.deepestvalley.com/cindy-kamler to understand the impact these projects will have on wildlife.

The land is free. The money is big. There is gold in the desert and this is the new rush. We hope the Inyo County Board of Supervisors looks beyond the renewable rush to the real gold, California’s gold: its last remaining open spaces, its fauna, flora and the unique landscapes that are Inyo County and vote not to accept REGPA in its current state.

Wynne Benti is the Chief Executive Officer of Spotted Dog Press, which has published books in the Eastern Sierra since 1997, and publishing guidebooks since 1995, getting our start in the City of Los Angeles at the foot of Mount Lukens in the San Gabriel Mountains. She writes from Bishop, California, on the northern end of the Owens Valley.