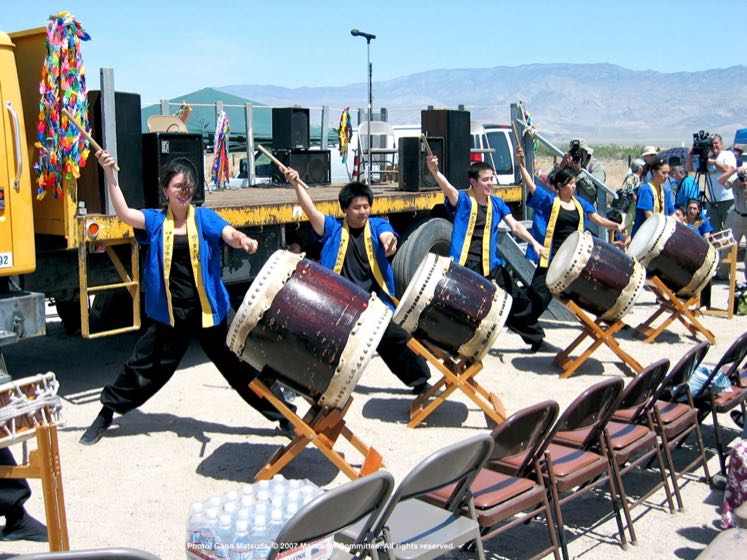 LOS ANGELES — UCLA Kyodo Taiko and the Grateful Crane Ensemble will perform at the 39th Annual Manzanar Pilgrimage, sponsored by the Manzanar Committee, which will be held on Saturday, April 26, 2008, at the Manzanar National Historic Site, located on US Highway 395 in California’s Owens Valley, between the towns of Lone Pine and Independence, California, approximately 230 miles north of Los Angeles.

“Continuing The Legacy” is the theme for this year’s program, which begins at noon.

UCLA Kyodo Taiko, the first collegiate taiko group in North America, was founded in 1990 and made its debut at the Opening Ceremony of University of California, Los Angeles’ commemoration of the Fiftieth Anniversary of the Japanese American Internment, which was held in 1992.

Led by 2007-08 directors Elizabeth Ishida, Emily Mukai and Kevin Suda, UCLA Kyodo Taiko is comprised entirely of UCLA students. They have performed annually at Nisei Week, Tofu Festival and the Lotus Festival in Los Angeles, the Intercollegiate Taiko Invitational, during halftime at UCLA basketball games, as well as the First Annual USA Sumo Open, in addition to many other campus, community and private events.

Founded in July, 2001 and led by playwright and producer Soji Kashiwagi, Grateful Crane Ensemble is a non-profit theatre company that creates and presents educational and entertaining programs that tell the stories of sacrifices made by first and second generation Japanese Americans throughout history.

Grateful Crane Ensemble has performed at the Keiro Retirement Home and throughout the Japanese American community, and since 2003, they have performed their popular musical play, Camp Dance: The Music and the Memories, up and down the West Coast, as well as in Denver and New York.

In 2006, they debuted Nihonmachi: The Place to Be – A Musical Journey, at the Japanese Cultural and Community Center of Northern California as part of the celebration of the 100th Anniversary of San Francisco’s Japantown. The show also played at the Japan America Theatre in Los Angeles’ Little Tokyo on March 30, 2008, and has received rave reviews.

Also performing will be Mary Kageyama Nomura, the “Songbird of Manzanar,” who will perform The Manzanar Song, accompanied by Grateful Crane and Scott Nagatani.

The keynote address will be given by Dr. Arthur A. Hansen, Professor Emeritus of History and Asian American Studies, California State University, Fullerton, and co-author of Manzanar Martyr.

The afternoon program will conclude with the traditional interfaith service and Ondo dancing.

In addition to the daytime program, the popular Manzanar At Dusk (MAD) program, co-sponsored by the Friends of Manzanar and Lone Pine High School, is scheduled from 4:00 PM to 7:30 PM at the Lone Pine High School auditorium, located at 538 South Main Street (US Highway 395), in Lone Pine, nine miles south of the Manzanar National Historic Site, across the street from McDonald’s.

The program will begin with a screening of “Music Man of Manzanar,” a short documentary film by Brian Maeda about Lou Frizzell, the music teacher at Manzanar. The filmmaker, along with original members of the “Jive Bombers,” will be in attendance for a brief question and answer period following the screening.

MAD participants will then have the opportunity to interact with former internees in attendance to hear their personal stories and discuss the relevance of the concentration camp experience to present-day events and issues.

The Manzanar Committee has also announced that seats are still available on two air conditioned buses to the Pilgrimage from Los Angeles.

Buses will depart from in front of the Japanese American National Museum in Los Angeles’ Little Tokyo (369 East First Street, between Alameda Street and Central Avenue) at 7:00 AM on April 26. All-day parking is available for $6.00 across from the departure point.

Both buses will also take participants to the Interpretive Center at the Manzanar National Historic Site. Those wishing to participate in the Manzanar At Dusk program should make reservations on the bus leaving Manzanar at 7:30 PM.

Reservations are now being accepted from members of the general public on a first-come, first-served basis by sending e-mail to manzcomm-at-yahoo-dot-com or by calling (323) 662-5102. The non-refundable fare is $40.00 per seat if reserved before April 21 or $50.00 after that date.

Pilgrimage participants are advised to bring their own lunch, drink and snacks as there are no facilities to purchase food at the Manzanar National Historic Site (restaurants and fast food outlets are located in nearby towns). Water will be provided at the site.