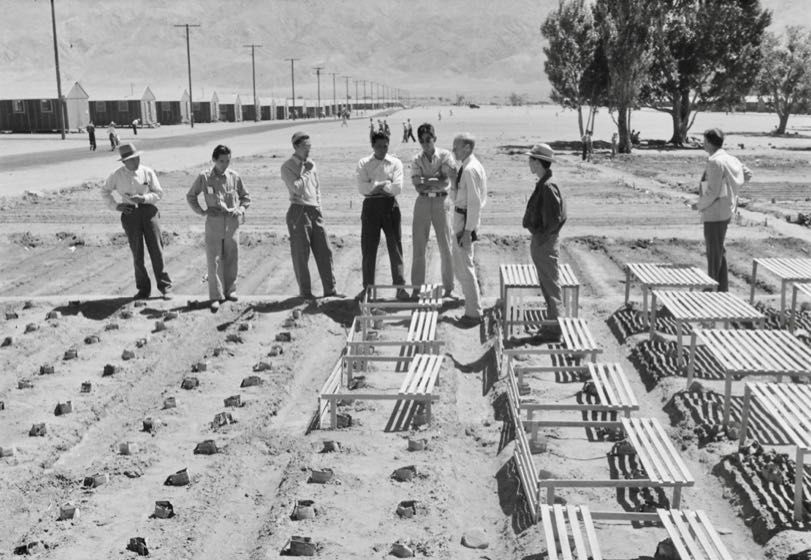 Editor’s Note: We’re more than a little late with this, we know, but we wanted to get this out because it is one of the unknown stories from Manzanar…the fact that research was done behind the barbed wire by Japanese American scientists who, despite being unjustly incaracerated by their own government, made positive contributions to the United States’ war effort by developing and improving the process of extracting high-quality rubber from the Guayule plant.

GARDENA, CA — Back on October 18, 2009, the story of extracting rubber from the Guayule plant during World War II when rubber was in short supply, was presented by Dr. Glen Kageyama, nuclear physicist at Cal Poly Pomona at an event sponsored by the Greater Los Angeles Singles chapter of the Japanese American Citizens League.

Dr. Kageyama is the son of Frank Kageyama, one of two horticulturists who worked on this project while imprisoned at Manzanar during World War II. The other was Tomoichi Hata.

Dr. Kageyama began his presentation by telling the story of Dr. Robert Emerson, a Quaker and grand nephew of essayist and Ralph Waldo Emerson.

Dr. Emerson, who was sympathetic to the plight of the incarcerated Japanese Americans. was also a professor at California Institute of Technology in plant physiology who wanted to give the Japanese Americans an opportunity to help with the war effort against the Empire of Japan, who controlled the area where the Hevea rubber trees grew. He also wanted to do something to help ease the anti-Japanese sentiment.

Rubber was in short supply and with the United States in need of a new source of rubber, the US Government invested $37 million to support the Emergency Rubber Project (ERP) in Salinas, California, where more than 1,000 scientists and technicians worked to plant and grow 32,000 acres of Guayule (pronounced Y-yoo-Lee), a plant native to Mexico, (Parthenium argentums).

Dr. Emerson organized a smaller Manzanar Guayule Rubber Project to develop techniques for faster growth of the plant and to increase yield of a higher quality of rubber. Their purpose was not to manufacture rubber items commercially.

Dr. Nishimura was in charge of the project and Dr. Emerson, who rode his bicycle around Pasadena, to and from work, so that he could save his gas rations to drive to Manzanar for the weekly meetings, served as the advisor.

Despite being unable to get actual Guayule seeds and instead having to settle for cuttings from the mowing waste of the Salinas Project, the Manzanar horticulturists were responsible for suggesting root hormones to help the cuttings grow. Later, they used household bleach to soak the seeds and decrease the time the it would take to germinate from six months to two weeks. The plants take about two years to grow to maximum yield.

At their peak, the roots and stems were harvested, chopped up into small pieces and put into a mill. At that point, ethanol and zinc sulfate were added and then the mixture was ground into a pulp. The resulting latex rose to the top of the liquid.

Homer Kimura developed the Jordan type mill to grind these roots and stems while Dr. Kodani studied the chromosome structure of the plant to determine which plant cells would produce a high yield plant. Dr. Nishimura discovered a way to extract unwanted resins from the latex using chemicals, and resulting in rubber that had a higher tensile strength than natural tree rubber.

On five acres of land with forty incarcerees, and at a cost of about $100.00, the Manzanar Guayule Project produced a higher yield of plant and a higher quality of rubber than the Salinas Project or tree rubber. The tensile strength of the rubber was 5,150 pound per square inch (PSI), compared to 3,700 PSI for Salinas, and 4,400 PSI for tree rubber.

After World War II, President Harry S. Truman ordered that all seeds and crops of the Guayule plant at Salinas be destroyed as it would conflict with the Allies need to export rubber. 32,000 acres of plants were plowed under and all documents from this ERP were classified so that no one would be able learn what happened or how to grow and make rubber from the Guayule plant. However, since the Manzanar group was headed by scientists with doctoral degrees, they submitted articles to professional journals which were published.

One article was submitted by M.S. Nishimura, R. Emerson, T. Hata, and A. Kageyama to the American Journal of Botany titled, “The Propagation of Guayule from Cuttings,” published in 1944.

Another was titled “Rubber from Guayule” and was submitted by M.S. Nishimura, F.N. Hirosawa, and R. Emerson and published in Industrial and Engineering Chemistry in 1947.

Irvin Askenazy also wrote an article in Westways magazine in 1977 titled, “As the Guayule Ball Bounces.”

At the event, Dr. Kageyama demonstrated making rubber from Guayule using a small bag of cut-up Guayule stems and a blender. The stems were ground into pieces and the necessary chemicals were added. After a long period of grinding, he showed how the latex rises to top of the liquid and after harvesting it with a sieve, the latex can be squeezed together to form a ball that can bounce.

It is interesting to note that the Manzanar Project was more successful than the Salinas Project, but did not get any recognition. Rather, they were totally ignored when the success of the ERP was celebrated. Dr. Kageyama stated that Guayule can be planted in arid parts of the United States and the world, because the plants require less water than most plants and far less than rubber trees, about ten inches of water per year.

Joyce Okazaki is a member of the Manzanar Committee. Her family’s photos, which were taken at Manzanar in 1944, were featured in Ansel Adams’ book, Born Free And Equal. Her photo is featured on the cover of the revised 2001 edition.

LEAD PHOTO: At the Manzanar concentration camp, Guayule plantings are being inspected by Doctor Robert Emerson, (third from right) a biochemist and botanist from the California Institute of Technology and Director of the Guayule rubber experiment. He is shown here conferring with several of his staff of young incarceree scientists at Plot 4. There are 408 plants in this plot that have been in the ground for ten days. Public domain photo by Dorothea Lange courtesy National Archives and Records Administration.

7 thoughts on “Rubber For The US War Effort: The Manzanar Guayule Project”