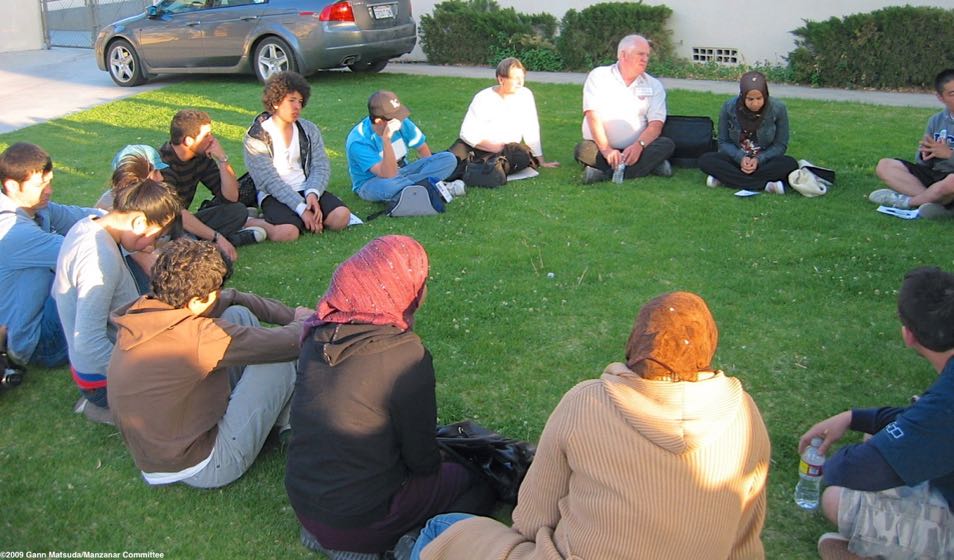 Editor’s Note: Manzanar Committee treasurer Fred Bradford, who is always working hard behind the scenes to ensure that the Manzanar Pilgrimage and Manzanar At Dusk programs run smoothly, finally got a chance to participate in the small group discussions at the Manzanar At Dusk 2009 program on April 25, following the 40th Manzanar Pilgrimage held earlier in the day. When I saw Fred sitting in with one of the small groups, I knew that it was the first time in all the years we’ve been sponsoring the Manzanar At Dusk/Manzanar After Dark programs that he had been able to participate in one of the small group discussions. And as his group finished up, I got the distinct impression that Fred was moved and impacted by the discussion in a big, big way….and I was right. Here are his thoughts about the experience.

MONTEREY PARK, CA — I wrote about my experiences after my first trip to Manzanar in 1982 (and now, some 27 years later, that story has been reprinted here on our web site (see Manzanar Pilgrimage 1982).

Since then, I have become an active member of the Manzanar Committee and was recently appointed as treasurer. Although I have participated in most of the Pilgrimages since 1982, prior to this year, I always seemed to be involved in the physical work. I normally had dinner and went directly to bed.

This year, the staff of the Manzanar National Historic Site did more of the miscellaneous work I used to do for the Pilgrimage, allowing me more time to watch and listen to the program. This also allowed me to have more energy for the evening’s event: Manzanar At Dusk (MAD).

As I was setting up for MAD and trying to eat dinner, I missed the short pre-release screening of Ken Burns’ latest documentary short, Manzanar – Never Again, as well as the panel discussion in the Lone Pine High School gymnasium. But afterwards, I had some free time and joined in the small group discussions for the first time and I was surprised at how my emotions were affected by the group I was in.

I selected the first group just outside the gym entrance and sat in. Most of the people in this group were either in their late teens or early twenties. Being 65 years old, I felt ancient. From the full scarves many of the young women wore, it was apparent they and some young men in the group were Americans of the Muslim faith.

For most of the discussion, I only listened. The moderator of the group held the discussion on topic and I sat and enjoyed the statements and reactions of all the participants.

Although I am deeply involved with the Manzanar Committee, I felt with my background as a 65-year-old Anglo from Minnesota, I would not have much to say that would be relevant to the discussion. But then, to my surprise, the moderator brought up various cultural changes occurring in recent years, including gay rights.

I’ve kept quiet about being a gay man.

I am open to many people including all of my family. But I never wanted my being gay to be a distraction to the work of the Manzanar Committee and only discussed it with one couple on the committee who asked me directly: “are you gay?”

But here in the small group, without any prompting from me, the subject came up and it was hardly noticed by the participants. I was totally surprised. More important, I felt I could now discuss why the efforts of the Manzanar Committee were so important to me in 1982 and for the next quarter century and I felt I could discuss all this and not detract from the overall discussions in this small group.

My first trip to Manzanar in 1982 was overwhelming. The high desert, the beauty of the nearby mountains, the harsh desert and more importantly, the stories I heard from various participants, made a great impact. The subject of 10,000 Japanese Americans, mostly United States citizens, being locked up in a square mile of gravel and awful weather was nightmarish. It all happened in 1942 lasting for three years. And yet it was almost happening to me and my friends forty years later.

In 1976, California Proposition 6 known as “Briggs Initiative,” was on the ballot. It was the hate-filled attempt by the far right to fire all gay and lesbian teachers. In the early Eighties, while Los Angeles and San Francisco became more accepting, the rest of the state remained viciously against me and my friends, all this while gay hairdressers and decorators were sought after by many of these same loathsome people.

In 1978, San Francisco’s first gay county supervisor, Harvey Milk, was assassinated by Dan White, his homophobic predecessor who had resigned the position. In 1986, soon after the onset of AIDS, a frightening attempt was made to lock up victims of HIV in concentration camps. At the time, these infected people were mostly gay men. California’s Proposition 64 was sponsored by Lyndon LaRouche, an extreme right winger who called himself a Democrat and was later convicted of election rigging, and was sent to prison, where he continued to run for President of the United States.

In the MAD small group, I mentioned some of this, although not in such great detail. But I did associate my living in California in the Eighties and Nineties and some of the vicious hatred toward my friends and I as being similar to the blatant hatred toward the Japanese Americans (and earlier, Chinese Americans) in the early Twentieth Century. While the open hatred and discrimination towards Asian Americans has mostly dissipated, hatred of those who do not “look like we do” has resurfaced. One example is that under President George W. Bush, Habeas Corpus had been unconstitutionally suspended. Another was the imprisonment of citizens and non-citizens offshore in Cuba, denied Constitutional rights such as due process.

Bush and his furious right wing zealots arrested people whose women wear veils and men who wear beards and bow towards Mecca three times a day. These people, (who are not Christians of Bush’s ilk) are discriminated against and locked up in Cuba. Similar far-rightists tried to fire gay and lesbian school employees in 1976. In 1978, a politician in San Francisco was killed for being gay. In 1986, these reactionaries tried to incarcerate HIV-infected people in concentration camps.

All of this reminds me of how the Japanese Americans in the United States of America were locked up in concentration camps during World War II and this is why I am so involved with the Manzanar Committee and why my participation in this year’s Manzanar At Dusk was so emotionally overwhelming.

4 thoughts on “Getting Emotional: Manzanar At Dusk 2009”