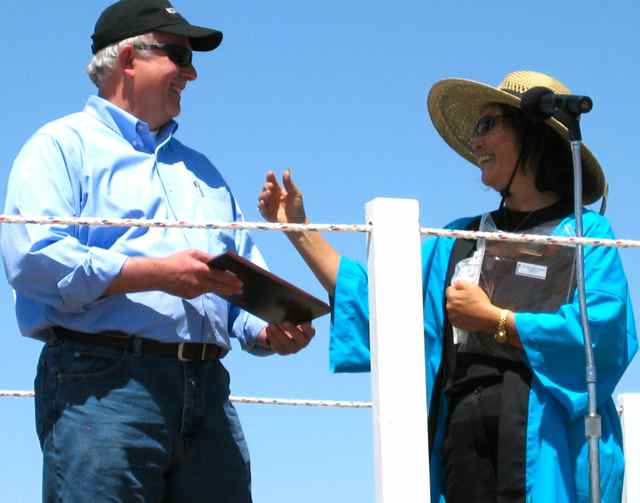 MANZANAR NATIONAL HISTORIC SITE, NEAR INDEPENDENCE, CA — Starting in 2009, the Los Angeles-based Manzanar Committee, which sponsors the annual Manzanar Pilgrimage and Manzanar At Dusk programs, began honoring individuals with the Sue Kunitomi Embrey Legacy Award, named after the late chair of the Manzanar Committee who was one of the founders of the annual Manzanar Pilgrimage and was the driving force behind the creation of the Manzanar National Historic Site.

Most would likely expect a long list of Japanese Americans to be in line to receive the award. Indeed, there is a veritable plethora of potential recipients among the former prisoners of the camps and Japanese American community activists. But to those who are familiar with the history of preserving and protecting Manzanar and pushing to establish it as a National Historic Site, the 2010 recipients come as no surprise at all, despite the fact that they are not Japanese Americans.

Indeed, Bill Michael is not Japanese American and neither was the late Keith Bright. But they were chosen as the 2010 recipients of the award for the vital roles they played in the Owens Valley in support of Manzanar.

Bright, 95, who passed away on April 6, 2010, initially opposed the establishment of the Manzanar National Historic Site. But he quickly reversed course after learning the history of Manzanar and the people who were imprisoned there, not to mention the positive impact it would have on the Owens Valley.

“Keith was instrumental in helping navigate the political scene,” said Bruce Embrey, Co-Chair of the Manzanar Committee. “He was a real powerhouse. Keith saw how creating the Manzanar National Historic Site was not just the right thing to do, but was an important part of Owens Valley history that needed to be talked about.”

Bright used his influence as a member of the Inyo County Board of Supervisors to educate his constituents about Manzanar and to twist arms when needed in Sacramento and Washington, D.C.

“It’s no exaggeration to say that without Keith Bright’s support and determination we would not be where we are today,” Embrey stressed. “Keith loved this land, loved his community and quite frankly, we owe Keith and the Bright family a incalculable debt of gratitude.” 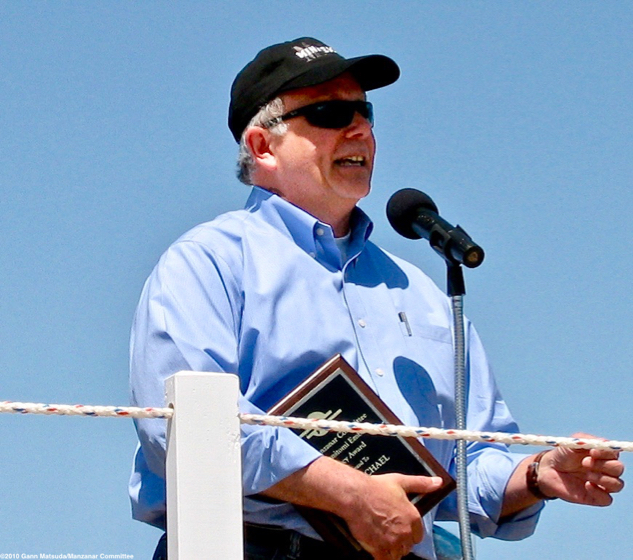 Michael’s contributions to the protection and preservation of Manzanar go back to the late Eighties when he was the Director of the Eastern California Museum (ECM) in Independence, California, about eight miles north of the Manzanar National Historic Site.

After receiving the award at the 41st Annual Manzanar Pilgrimage on April 24, 2010, Michael reflected on the early days of his work at the ECM, long before Manzanar became a National Historic Site.

“I go back to some of my first discussions and my first times on the site with Shi [Shiro] Nomura [who created and curated an exhibit on Manzanar at the ECM], to see how important this place was to a time period in our history,” said Michael, now the County Librarian for the Mono County Public Libraries. “It was a huge national mistake that hadn’t been fully acknowledged at the time and needed to be.”

“In acknowledging it, we’ve become a better nation because we’ve recognized our wrong,” added Michael. “We said, ‘we screwed up and now we’re going to tell everyone how we screwed up and, by doing that, make sure it doesn’t happen again.’”

Long before Japanese Americans were imprisoned behind the barbed wire at Manzanar during World War II, the area was inhabited by the Owens Valley Paiute. With his background in Native American History, Michael quickly found a niche at the ECM, and when Nomura brought his exhibit there, Michael immediately recognized the common thread between the experience of Native Americans and that of Japanese Americans.

“My background before I came here was Native American History,” Michael noted. “[The imprisonment of Japanese Americans at Manzanar and the nine other American concentration camps] was another forced removal to a reservation for a whole series of different reasons and it needed to be acknowledged that it was wrong.”

For Michael, his work and advocacy in support of Manzanar was not based on any sort of formal, painstakingly organized, long-term plan. 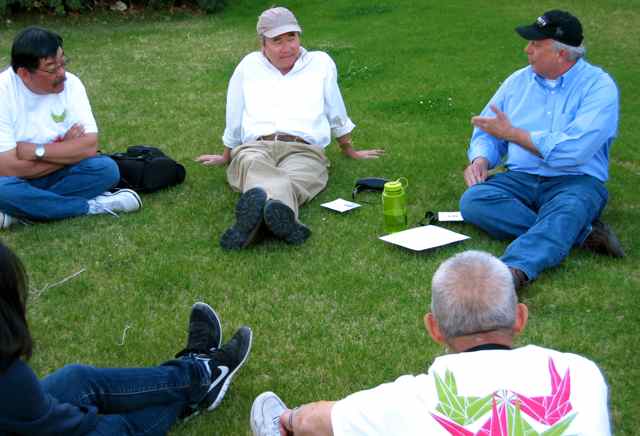 “There was never any overall, huge plan that I’m going to do this,” he explained. “Well, maybe there was a little bit, but mainly, it was a day-by-day thing.”

“Where are we going with this today? There’s a public hearing and there are going to be people who are hurt and upset. We’ll deal with them today and then we’ll go to the next day and take the next step,” he added.

After receiving the award, Michael expressed his gratitude for the recognition, but he could not mention everyone.

“When I mention people who should be thanked, right after Shi and Mary Nomura, would be Mas Okui, who took over [the Manzanar exhibit at the ECM] to carry on Shi’s legacy,” said Michael.

“And then there’s the whole Manzanar Committee, the people who have been plugging along year after year after year,” added Michael. “[The annual Manzanar Pilgrimage] is really becoming even more important now, to get the young people up here and get their first exposure to the place, not just the topic which they may have heard about or seen something about.”

“You have to be here at Manzanar to get the context.”

Sue Kunitomi Embrey, who passed away on May 17, 2006 at the age of 83, toiled for many years in her quest to preserve and protect Manzanar and to educate future generations. But even though Michael shared the same goals, the two did not immediately join forces, despite the fact that they would end up working closely together for many years.

“It took a few years before Sue and I connected,” Michael said. “She had her political process stuff going on and what was going on at the ECM was not that significant to her.”

“But when I did eventually get to know her, get to learn from her and, I think, earn some respect from her—she certainly earned all of my respect—that was a pretty powerful relationship,” Michael added, wistfully. “She’s certainly someone who needs to be recognized always here at Manzanar. Having her name on the plaque is pretty cool.”

Having Michael’s and Bright’s names on their respective plaques is pretty cool, too.

The views expressed in this piece are those of the author and are not necessarily those of the Manzanar Committee.