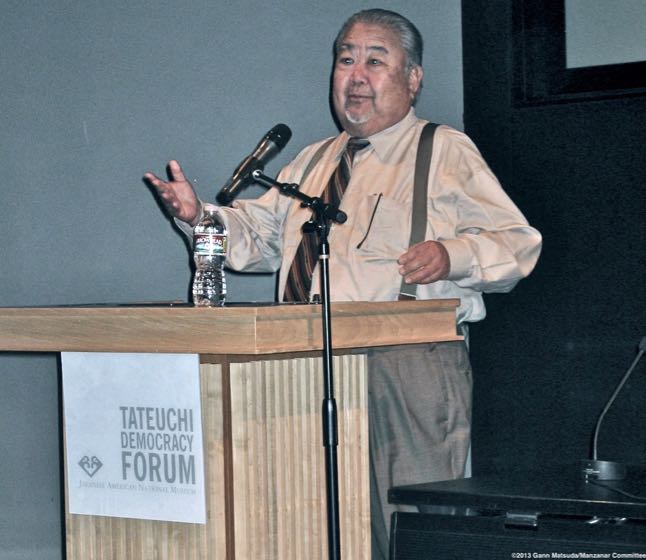 PILGRIMAGES: The origins, the history, and the future of the Manzanar and Tule Lake Pilgrimages was the focus of an October 8, 2011 event at the Japanese American National Museum in Los Angeles’ Little Tokyo. The following is the first of two stories covering the event.

LOS ANGELES — The history and future of the Manzanar and Tule Lake Pilgrimages, along with the different generations who participate in them, both young and not-so-young, were in the spotlight at the Japanese American National Museum (JANM) on October 8.

During Community Builders: Japanese American Activism, 1960-1980 (Part 1), JANM brought together a diverse group of voices representing the past, the present and the future of both pilgrimages to discuss the origins, the history and what is on the horizon for both of the annual events.

Starting off the event was California Assemblymember Warren Furutani, who represents the 55th Assembly District, which includes the cities of Carson, Harbor City and Harbor Gateway, Lakewood, parts of Long Beach and Wilmington.

Furutani was one of the founders of the Manzanar Pilgrimage back in 1969.

“I remember when Victor Shibata and I were going to Oceanside to be in an anti-war march,” he reminisced. “The idea was to take the issue of the Vietnam War directly to the Marine base [Camp Pendleton]. I don’t know how smart that was, but we went down there to work with a group called Green Machine. The leader was a young woman named Pat Sumi, who asked us to come down and help.”

“We were sitting there, talking about marches,” he added. “I think we had the Poor People’s March in Washington, D.C., the farm workers had just marched to the Capitol to talk about their issues. Victor and I said that we had to march somewhere, and that’s when the idea came up of marching to Manzanar.”

“[Manzanar] was the closest, so logic said we can march to that, and, in those days, we didn’t have Google Maps, so we took out the map. [A little over 200] miles—that doesn’t sound too far, so we went.”

With that, Furutani and Shibata, along with a group of about 150 others, made the trek to Manzanar in what would become the first Manzanar Pilgrimage on a cold, winter day in December 1969. But their limited knowledge of the camp experience, and Manzanar in particular, led them astray.

“Our first turn off of Highway 395 [the road that runs past Manzanar in the Owens Valley] after we went past the [former Manzanar High School auditorium, now the Interpretive Center at the Manzanar National Historic Site]—that was the landmark that we were told about,” said Furutani. “There was a sign called Manzanar [Reward] Road, and I don’t know if the sign is there [anymore] because we stole the one that was there at the time [it has long since been replaced]. But it went east. So, instead of going west, we went east, in the opposite direction.”

“We came upon the old [Manzanar] Airport,” added Furutani. “It had old asphalt that criss-crossed [the old runways]. With our limited knowledge, we started imagining those were the roads in the camp, and the barracks must’ve been here. We were trying to put it together with a really limited amount of knowledge.”

Then things got a bit more exciting.

“Off in the distance, a pick-up truck started coming towards us,” Furutani recalled. “There was a cloud of dust, and it kept on coming closer, and as it got closer, we started to pay more attention. We could see the guys in it had cowboy hats on. As it got closer still, we could see there was a gun rack in the back window.”

“When they pulled up on us, they rolled down their windows and asked, ‘what are you boys doing here,’ Furutani added. “We said, ‘we’re not boys, we’re men, and we’re looking for Manzanar, which was a camp that people like you put us in.’”

“We were pretty [gutsy] in those days.”

But that chip on their shoulders got knocked off very, very quickly.

“They started laughing, which really [angered] us,” said Furutani. “‘What the hell are you laughing at,’ we asked.”

“So, with our tails between our legs, we got in our cars and drove to the other side of 395, and that’s when we found the [cemetery] monument,” he said. “It was stark, it was weather-beaten, but it was still white, and it was interesting, because the backdrop was, literally, [Mount Williamson], and the Sierra Nevada mountains. There was an elegance to it, a starkness. It was very dramatic during a cloudy day, which provided all the environmental drama that helped fill in all the spaces relative to the limited knowledge we had.”

“We started walking around, and it was like discovering a shallow grave, where the elements had blown the top layer off, and then the grave was exposed, and you could see a whole history,” he added. “We didn’t understand it, because we didn’t have the information. The only book out at the time, was called America’s Concentration Camps by Allan R. Bosworth. Of course, we didn’t have any movies, or any of the things we have now relative to the experience.”

Not long after the first Manzanar Pilgrimage in 1969, momentum began to grow to make a similar pilgrimage to the site of the Tule Lake Segregation Center, which is now part of the World War II Valor in the Pacific National Monument, administered by the National Park Service.

“Out of the 300 people, I would guess five were Nisei,” added Shikuma, who was a student at the University of California, Berkeley, at the time. “Everyone else were students, so there wasn’t a lot of first-hand knowledge. It was kind of limited. But, starting in the early Eighties, after the Commission on Wartime Relocation and Internment of Civilians hearings in 1981, there was a real opening up among the Nisei, in particular, to share their stories, so we started seeing more Nisei. In 1982 and 1984, we actually had ten or 15 Issei come and join us.”

One of the primary motivations for the Tule Lake Pilgrimage was to promote healing within the community.

“One of the people who was involved at the time, Stephanie Miyashiro, had a very firm conviction that the Pilgrimage wasn’t just about learning history, and it wasn’t just about seeking artifacts and looking at ruins,” Shikuma noted. “For her, the central core of what the Pilgrimage was all about was a healing process for the community, that there had been this great damage to the community, as a whole, [as well as] to individuals, and that the healing had never happened.”

“In order to help with the healing, we needed to start talking about what happened, and how it affected us,” Shikuma added. “Her idea was that you couldn’t do that in a big setting with 300 people, and it would take too much time to have 50 or 60 people come up and talk.”

The answer was to break up into smaller discussion groups.

“We decided to split into small groups, no more than 15, maybe 17 people, and we wanted them to be intergenerational,” Shikuma explained. “[That way], it wasn’t all the Nisei gathered together in one group, and the Sansei in another group, so we set it up that way, and it has continued [that way] since the mid-1980’s, in every Pilgrimage.”

“For many of us, we feel that was the core of what the Tule Lake Pilgrimage was all about, those intergenerational discussion groups, where people can talk about what happened, how it happened, how it made them feel, how it affected their families, and how it continues to affect their families,” Shikuma elaborated. “For those of us who weren’t born yet, how did we find out about [the camp experience], how did we feel about it, and how did it affect our lives? That’s a key thing.” 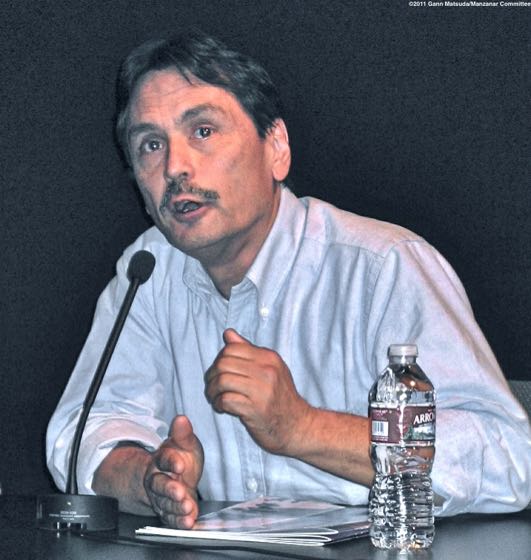 The Manzanar Committee added intergenerational discussions to the Manzanar Pilgrimage experience in 1997, during an evening event called Manzanar After Dark.

“We actually stole it from the Tule Lake Pilgrimage, where they have an intergenerational component to their pilgrimage,” said panelist Bruce Embrey, Co-Chair of the Manzanar Committee. “There are fewer and fewer incarcerees at the Pilgrimage, so it’s more difficult to get those direct stories.”

Since then, the event has evolved into a much larger program that is now known as Manzanar At Dusk, and has become a key part of the Manzanar Pilgrimage experience.

“[Manzanar At Dusk] is one of the most important parts of the Pilgrimage, because it allows an exploration of what actually occurred in an individual way, but in a much more intimate setting where people can draw out some of the lessons about what happened in camp,” Embrey explained.

“[Manzanar At Dusk] is so powerful because the younger generations are right there with the Nisei, so I think it’s one of the best things,” Embrey elaborated. “This past year, [college students] actually re-enacted some of the stories of people who survived camp, and you thought, ‘well, here’s some 18, 19 or twenty-year-old,’ but it was very effective, and very powerful to watch the younger generation portray what people had gone through.”

Students from the UCLA Nikkei Student Union (NSU), who were among the students Embrey mentioned above, moderated the discussions.

“I enjoyed listening to the presentations about Tule Lake, because my grandfather was incarcerated there, so I have a family attachment to that,” added Ichinose. “I enjoyed hearing about what they do at their pilgrimage.”

The event was also sponsored by The Aratani CARE grant, and the UCLA Asian American Studies Center.

In the next story about this event, the future of the Manzanar and Tule Lake Pilgrimages, and the role students might play in them, not to mention throughout the Japanese American community, will be examined.

Gann Matsuda is the editor of the Manzanar Committee’s Official Blog.

Unattributed views expressed in this story are those of the author, and are not necessarily those of the Manzanar Committee.

LEAD PHOTO: California Assemblymember Warren Furutani broke down the origins and history of the Manzanar Pilgrimage during an event at the Japanese American National Museum on October 8, 2011. Photo: Gann Matsuda/Manzanar Committee.

Panel Discussion: Barbara Takei and Stan Shikuma of the Tule Lake Commitee, and Bruce Embrey of the Manzanar Commitee participate in an interactive discussion with students, primarily from the UCLA Nikkei Student Union (audio only, with captions to identify speakers)

2 thoughts on “Panel Looks At Past, Present And Future Of Manzanar And Tule Lake Pilgrimages During JANM Event – VIDEO”