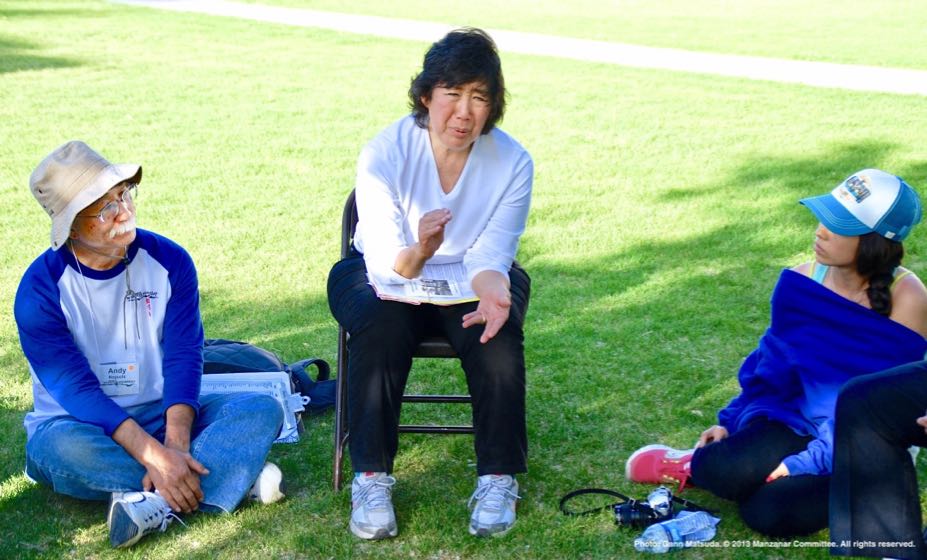 The following is the second of two short stories by Yosh Golden, who was born behind the barbed wire at Manzanar during World War II. This story, along with Desert Birth – June 1944, is the foundation for the upcoming film, The Song, a short film based on Manzanar, and the Japanese American Incarceration story. Originally published in Northwestern University’s Triquarterly Online (Issue 140, Summer/Fall 2011). It is reprinted here with permission.

Toby, the newly married grandson, greets Grandmother Sachie with his usual cheerfulness. It barely covers the concern in his voice. His bride, with a smile, gently greets Grandmother and grasps her once-strong hands. Grandmother is awake but a little groggy from the morphine required to quell the pain deep inside her wasting body, which in decades past gave birth to many vigorously healthy infants.

Toby looks at Grandmother, then at his bride, but he has no point of reference. Puzzled, he says, “I won’t.” The couple leave the bedroom, now swathed in shadows at sunset.

The daughter approaches the bed, looking intently at her mother’s pain-wracked face and withered body, and recollects a wedding portrait taken of a luminous, beaming young Sachie some fifty years earlier. Trying to understand the grandmother’s plea to the grandson, the daughter leans over the bed railing and asks quietly, “You were very lonely, weren’t you, Mama?”

And her mother, who seldom complains or cries, who has been the recognized source of strength and encouragement for a boisterous clan of eleven children, twenty-five grandchildren, and husband Yoshizo, looks at her oldest daughter with unbearably sad eyes and replies, in a whisper, “Yes.”

Searching her mother’s anguished face, the daughter grasps for the meaning of this simple answer.

Born in Portland, Oregon, in 1921, her mother had returned to Japan when she was three years old to be educated and to grow up in a comfortable hillside home overlooking Hiroshima. Sachie came back to America when she was seventeen. An arranged marriage took place, and a son, Hajime (Johnny), was born a year later. Some seventeen months after his birth, shortly after the bombing of Pearl Harbor, the family was forced into Manzanar Relocation Camp, set in a desolate California valley where sand and snow blew through chinks in the uninsulated tarpaper barrack walls. They had lost their grocery store, called Jimmy’s Courtesy Market, along with a modest but comfortable home and most of their possessions, following the two-week notice that they were being evacuated from Los Angeles. Because Sachie was fluent only in Japanese, husband Yoshizo and barrack neighbors helped her learn English. Always a bright student, she practiced speaking and writing diligently, but the loneliness of those endless days and years in Manzanar was lifted only by conversations with elders who spoke Japanese, by playing with her firstborn son, and, after the passage of three more years, by taking care of a newborn daughter.

For more than three years, Sachie looked past Manzanar’s barbed-wire fences to the barren desert landscape framed by mountains. At times, distant Mount Whitney reminded her of Mount Fuji, thousands of miles across the ocean to the west. For three years while America and Japan were at war in the Pacific, there was only one communication with her mother, who sent a telegram through the Red Cross. Her mother, Minae, simply wrote, “Come home.” Sachie received nothing more, and she did not hear from her younger sister or brother, who remained in Hiroshima. Nor was Sachie able to learn what her high school classmates at Yaseda Girls School were doing, what their lives were like during the war.

By March 1945, when Sachie’s daughter was nine months old, the young family was able to leave the desert camp. With one-way train tickets east and a government stipend of twenty-five dollars per family member, the young family hoped to restart life in Chicago. In one of the suitcases carrying their meager possessions, Sachie had carefully wrapped her treasured high school yearbook, which had been kept safely hidden from the military soldiers and police who had rounded them up years earlier. In Manzanar, the cherished yearbook had reminded her of classmates left behind and of joyful shared experiences.

From time to time, while sitting alone in the barracks, Sachie had gazed for long moments at the yearbook’s black-and-white photos of students learning to conduct a proper tea ceremony, arranging flowers, and playing classical Japanese instruments. The photographs brought back memories of mathematics taught by a stern and exacting sensei (teacher), friendly games of volleyball in gym class, and laughter-filled days at the beach, swimming in the Pacific Ocean’s strong currents. In one picture her friends are wearing black swimsuits, but Sachie wears white; her smile is playful and sunny.

After graduation, some classmates worked for a few months with Sachie at the post office, where she successfully tested for and won a coveted position. But, agreeing with Sachie that her future would be too limited in Japan, Minae arranged for her daughter to sail under the supervision and protection of a friend, Mrs. Mori, who was returning to her own husband and family in America.

Hundreds of excited passengers and well-wishers crowded the pier. Laughter mingled with shouts of farewell, words of caution, and good luck wishes. In the midst of this boisterous human hubbub, before boarding the ship docked in Yokohama Harbor, Sachie turned to her mother and bowed several times, murmuring words of respect, gratitude, and thanks for all that had been done for her.

Minae smiled at Sachie, believing and trusting that her beautiful, adventurous daughter would be safe in America. In the steamer trunk Sachie and her mother had packed a few kimonos, several Western-style dresses, and books, including the yearbook. In her senior-class photograph, Sachie was one of 121 faces, young women with shiny black hair worn pulled back or braided, their eyes bright, perhaps seeing future possibilities. Many pages were inscribed with good wishes penned by Yaseda Girls School classmates and teachers.

The good wishes were sometimes transformed by Sachie into prayers against suffering and a shield against loneliness. On the morning of August 6, 1945, Yaseda Girls School and most, if not all, of Sachie’s former classmates and teachers ascended to the heavens in an atomic mushroom cloud that burst bright against the clear horizon, their voices and hopes lost forever in the roar of the monstrous blast.

In the decades that passed, Sachie never brought out the yearbook for her family to see. Only in quiet moments alone did she take the book from her dresser drawer and look at the hopeful faces—Kae, Mariko, Michiko, Tomo, Yae, Kazuko, and other school friends with whom she had shared dreams. When memories weighed on her too heavily, she lifted this shield against loneliness and put the book away.

Now gravely ill and too weak to attend the wedding of a grandson to another bright-eyed, dark-haired young woman, Sachie no longer has strength to raise the shield against the loneliness in her life. “Don’t let her be alone,” she says, weeping. “Don’t let her be lonely.” And Sachie’s oldest daughter sees that after all the years of making so many others feel secure, protected, and loved, Mama is really, finally, pleading for herself.