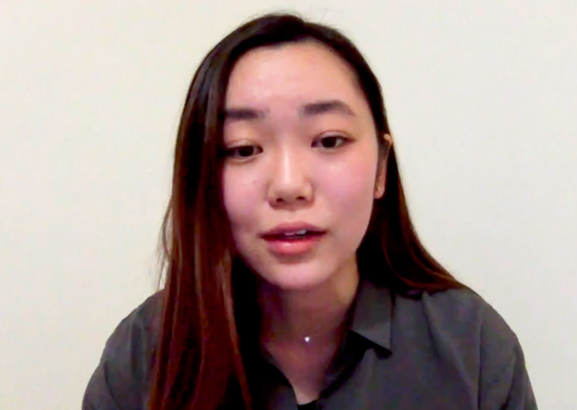 The following is the text of a speech during our virtual 52nd Annual Manzanar Pilgrimage on April 24, 2021.

Growing up, something always felt a little bit wrong. It felt wrong when teachers could not pronounce my name right, or when they mistook me for the other Asian girl in my class. I felt embarrassed when my Mom packed me Japanese food for lunch, or when my classmates gave me an awkward glance when we learned about Pearl Harbor in my middle school history class.

It felt wrong when I went to high school. I learned that the land the school is built on was once a plant nursery, which belonged to a Japanese American family. This family was taken into internment in Manzanar in 1942, and they were forced to sell their land while they were there, and yet, my school’s educational curriculum barely skimmed the incarceration. Just the facts and figures and nothing more.

It felt wrong that even though I knew about Day of Remembrance, the first time I actually saw it being recognized was in the Nikkei Student Union at my college. Getting involved in NSU (Nikkei Student Union) led to me attending my first Manzanar Pilgrimage in 2018, and it was during Manzanar At Dusk later that evening when I first talked to a crowd about how I felt growing up.

During my second year of college, I had the honor of attending Katari, and spent two days at Manzanar where I experienced a personal, intensive, place-based learning about the history where it happened. I felt worry and anger when I learned so many new parts of the bigger picture, like the long history of anti-Asian racism in this country, and many human rights violations that Japanese Americans faced in the camps. Why was I never taught this before? Why did no one around me talk about this?

I am a shin-Nikkei, who grew up with barely any connections to the Japanese American community. I did not play basketball, or go to temple, and I do not have any family that was incarcerated. Until fairly recently I did not even confront my Japanese American identity.

Many people questioned why I am involved in things like Manzanar at Dusk, or NSU, and even the JACL, and honestly, it took me a long time to figure out why I found the work that I do so valuable. To put it simply, it is because when I started to get involved in these spaces, for the first time in my life that feeling of being wrong and embarrassed started to fade. For the first time I felt like I knew why I felt the way I did, and I knew that I was working towards a reality where people do not have to feel that same way ever again.

Manzanar was not beginning or the end of Anti-Asian racism in this country, but it is important to recognize this history and not let it be written out of the narrative. The same xenophobia and racism that allowed for the incarceration to happen still plagues our society today, and if we allow our voices to fade and for this history to be forgotten it will only lead to more ignorance.

Just because we are not taught about it in school, or because it is not covered on the news does not mean that these events did not happen, or that the people who perpetrate racism and violence can get away with the pain and damage that they cause.

Right now, I’m scared. It is painful to turn on the news and like many of us who might be watching today I am grieving the pain that the Asian American community is experiencing. But I also feel brave, because unlike when I was growing up, I know I’m not alone in this struggle.

I want you to know that whether you were taught history from your ji-chan and ba-chan, or if it’s your first time hearing about it, the important thing is what you will do about the information you’ve learned. You do not have to be the direct victim of injustice to speak out against it. If Manzanar teaches us anything, it is that we need to speak up, and let it be known democratic and civil rights for all people must be protected.

A third-year student at California State University, Long Beach (CSULB), Seia Watanabe is a Communication Studies and Film Production Management major who currently works as a Video Producer, and serves as the President of the CSULB Nikkei Student Union. A Los Angeles native, she began her involvement in the Japanese American community during her time in college, after joining NSU, and has since been involved in various programs such as the Nikkei Community Internship, Katari, and Nisei Week.