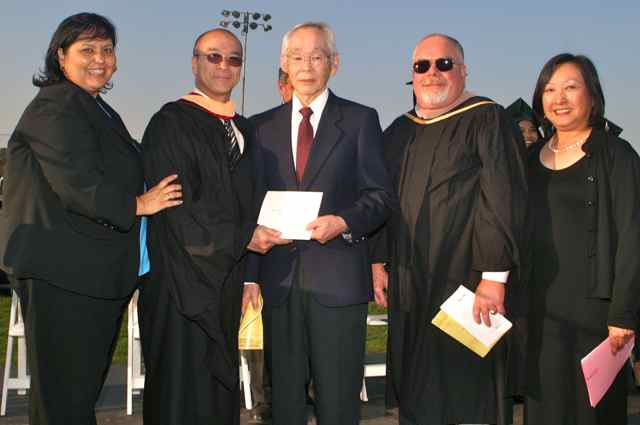 LOS ANGELES — Mutsue Uyeno. Mutsue Uyeno! Never in my wildest dreams did I think a name such as this would mean so much to me.

As I sat and listened to the speech by Fangheng Zhou, the class of 2009 valedictorian at Belmont High School’s (Los Angeles) graduation ceremony on June 17, 2009, I was amazed she said that Belmont was “…a place where miracles happen.”

Zhou had just related the story of how she came to the United States two years ago, without knowing any English, and Belmont was the only school that would admit her. Now, she’s going to attend the Massachusetts Institute of Technology in the Fall. That was her miracle.

My miracle was a bit different.

In April, I received an e-mail from Belmont Assistant Principal Dalton Cole, asking if I knew anything about how a Nisei woman could receive her high school diploma from 1942. He knew of my interest in Manzanar and other Japanese American experiences.

California State Assembly Bill 781 (enacted into law in 2004; California Education Code 51430) allows the issuing of high school diplomas to Japanese Americans whose lives were interrupted by their forced relocation and imprisonment in American concentration camps. So I called the number he gave me and connected with Uyeno’s son, Jerry Morishige of Chicago, to assure him we would begin the process of obtaining the diploma for his elderly mother.

Belmont principal, Gary Yoshinobu, and Credit Clerk, Juan Navarro, sent in the appropriate paperwork and asked me to get Uyeno’s birth date. On May 7, I called Morishige again, this time to get his mother’s birth date, only to be heartbroken when he told me this his mother had passed away just two days prior, on May 5.

But he expressed his family’s desire to proceed and get the precious diploma for their dear mother. The next week, I received the official diploma on my desk, courtesy of Mr. Navarro. It was beautifully printed with Uyeno’s name and was dated June 15, 1942.

Seeing the diploma brought tears to my eyes.

Speaking to Morishige made me realize how very real the Nisei experience was during World War II. Although my own parents were also uprooted, they were older than Uyeno and were able to spend time together as newlyweds.

In contrast, Uyeno was a senior in high school and was unable to go to her prom, finish her semester or walk in her graduation ceremony to receive her diploma.

Through this experience, I really felt her pain. Morishige’s older brother, Ken, lives in Fountain Valley, so he was able to come to Belmont’s graduation ceremony to accept the diploma on behalf of the family. I nervously introduced him and told Uyeno’s story, about how she had to leave Belmont in the middle of her senior year to be locked up behind barbed wire at Manzanar. The graduates were attentive and the audience was quiet. Everyone who heard the story had tears in their eyes.

Never in my 35 years of teaching have I felt so proud, so fulfilled, to have been a part of completing this woman’s wish. It was important to get Uyeno’s diploma for her family and for her. It was important to tell her story to young people and their parents, many of whom probably never knew of the imprisonment of Japanese Americans during World War II and it was important for me to be at Belmont, the place where miracles happen. Unforgettable!