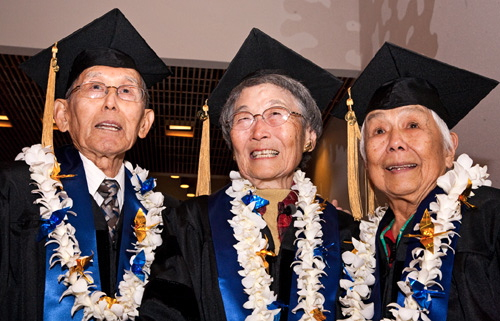 The following is from the UCSF Today. It is reprinted here with permission. Original story: Honorary Degree Ceremony Aims To Help Right a 67-Year-Old Wrong.

SAN FRANCISCO — All the familiar elements were there: flashing cameras, misty-eyed family members, and a live orchestra playing “Pomp and Circumstance.”

But the graduation ceremony that took place at the University of California, San Francisco on December 4, 2009 was anything but typical. The honorees were dozens of Japanese Americans whose educations were interrupted when they were sent to internment camps during World War II.

UCSF was able to track down the families of 67 former students from its schools of Medicine, Dentistry, Pharmacy and Nursing, and all were honored at the December 4 ceremony at Mission Bay. While most of the internees have passed away, three were able to attend and accept diplomas on their own behalf, including former School of Nursing student, Edith Oto, who was celebrating both her graduation and her 90th birthday.

“This is just so exciting,” said nursing honoree Aiko “Grace” Obata Amemiya, who beamed as she adjusted her cap and gown and prepared to join the graduation processional.

“I was there in July and spoke to the Board of Regents, and when they voted yes [on the honorary degrees], I was just floating,” she said. “I still am.”

The third former student to attend the event, School of Dentistry honoree Setsuo Torigoe, said he has been talking about the board’s decision ever since it happened.

“This is a great honor, and it makes me happy inside,” said Torigoe, who was joined at the ceremony by numerous family members.

UCSF Chancellor Sue Desmond-Hellmann, MD, MPH, noted that despite having their studies at UCSF cut short, many of the honorees had gone on to complete their degrees elsewhere after the war.

“They let nothing deter them from their plans,” Desmond-Hellmann said during her welcoming remarks. “I am truly honored to be able to complete the circle.”

Keynote speaker Patrick Hayashi, Ph.D, a former UC associate president and a UC Berkeley alumnus, fought back tears as he described the hardships endured by the roughly 120,000 Japanese Americans and nationals who were forced to relocate into camps.

“You taught us by example the importance of hard work, sacrifice and service,” Hayashi told the honorees before leading the audience in a chorus of omedetou gozaimasu, the Japanese phrase meaning “congratulations.”

One by one, wearing leis of white flowers interspersed with blue and gold origami birds, the honorees or their family members stepped forward to accept their degrees from the chancellor and the deans of the four schools. The diplomas bear the Latin inscription, Inter Silvas Academi Restituere Iustitiam, which means “to restore justice among the groves of the academe.”

Zina Mirsky, RN, Associate Dean of Administration for the School of Nursing, was one of the two people asked to read off the list of names at the ceremony. For Mirsky, the event marked the culmination of an effort that began in 2004 when she met Grace Amemiya and decided to take up her cause.

The process was slow, but in 2008 Mirsky and Joseph Castro, Ph.D, UCSF’s Vice Provost for Student Academic Affairs, brought the issue to Judy Sakaki, Ph.D, Vice President For Student Affairs in the UC Office of the President. Sakaki, whose parents and grandparents were interned during the war, immediately got on board.

Along with UC Davis law professor Daniel Simmons, Sakaki co-chaired the task force that urged the Board of Regents to approve a one-time suspension of the 37-year-old UC moratorium on honorary degrees.

UCSF is the first public university in California to provide such degrees to former students. Three other UC ceremonies will follow in the coming months on the Davis, Berkeley and Los Angeles campuses.