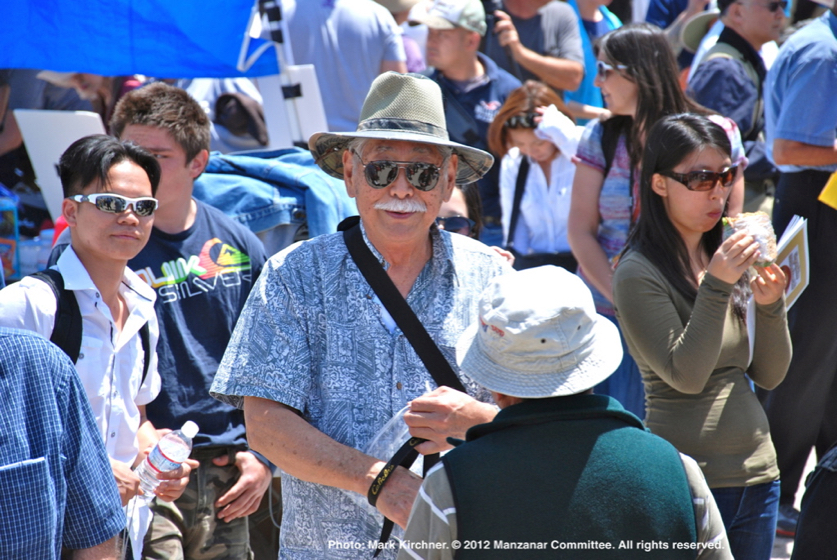 LOS ANGELES — On March 26, the Manzanar Committee announced that educator Mas Okui has been chosen as one of the 2014 recipients of the Sue Kunitomi Embrey Legacy Award.

The award, named after the late chair of the Manzanar Committee who was also one of the founders of the annual Manzanar Pilgrimage, and was the driving force behind the creation of the Manzanar National Historic Site, will be presented at the 45th Annual Manzanar Pilgrimage, scheduled for 12:00 PM PDT on Saturday, April 26, 2014, at the Manzanar National Historic Site, located on U.S. Highway 395 in California’s Owens Valley, between the towns of Lone Pine and Independence (see map below).

As a ten-year-old boy, Okui spent more than three years behind the barbed wire at Manzanar. That experience—the unjust incarceration of more than 120,000 Americans of Japanese ancestry during World War II—shaped his life’s purpose and dedication to keep the story alive.

Active in Asian American issues since the 1960’s, Okui initiated the Asian American Studies course at Gardena High School. He was also involved with the Yellow Brotherhood, and worked with the City of Gardena’s teen-age drug avoidance program.

Since the 1970’s, Okui has conducted tours of Manzanar, and for more than thirty years, led the United Teachers Los Angeles seminar on its annual trip to the Manzanar Pilgrimage, the purpose being, to teach teachers on how to educate their students about the Japanese American Incarceration. Dozens of other groups, including the Japanese Consulate, the Japanese American Citizens League, the Los Angeles Department of Water and Power, CNN, CBS, public and private schools, and civic organizations were among those that visited Manzanar with Okui.

At the Eastern California Museum in Independence, California, Okui has led school groups and worked with the Shiro Nomura Manzanar exhibit. During the 1990’s, he served as a docent at the Japanese American National Museum in Los Angeles, talking to scores of groups about the Japanese American experience, and as part of their outreach program, he has spoken to groups throughout the nation.

For ten years, Okui served on the Manzanar National Historic Site Advisory Commission. What is on display in the exhibit at the Manzanar National Historic Site Visitors Center is, in part, the product of their efforts. Additionally, Okui served on the board of the Friends of Manzanar, playing a key role in raising funds to rebuild Block 14 (demonstration block).

“Mas Okui has been a tireless advocate and educator, telling the story of Manzanar and the forced removal of the Japanese American community to literally thousands of people, including many Los Angeles Unified School District teachers,” said Manzanar Committee Co-Chair Bruce Embrey. “With humor, wit and poise, Mas is one of the most ardent advocates for keeping our story alive.”

The Manzanar Committee is dedicated to educating and raising public awareness about the incarceration and violation of civil rights of persons of Japanese ancestry during World War II and to the continuing struggle of all peoples when Constitutional rights are in danger. A non-profit organization that has sponsored the annual Manzanar Pilgrimage since 1969, along with other educational programs, the Manzanar Committee has also played a key role in the establishment and continued development of the Manzanar National Historic Site. You can also follow the Manzanar Commitee on Facebook, Twitter, Pinterest and YouTube.

The Manzanar Committee’s Official Blog is licensed under a Creative Commons Attribution-NonCommercial-NoDerivs 3.0 Unported License. You may copy, distribute and/or transmit any story or audio content published on this site under the terms of this license, but only if proper attribution is indicated. The full name of the author and a link back to the original article on this site are required. Photographs, graphic images, and other content not specified are subject to additional restrictions. Additional information is available at: Manzanar Committee Official Blog – Licensing and Copyright Information.