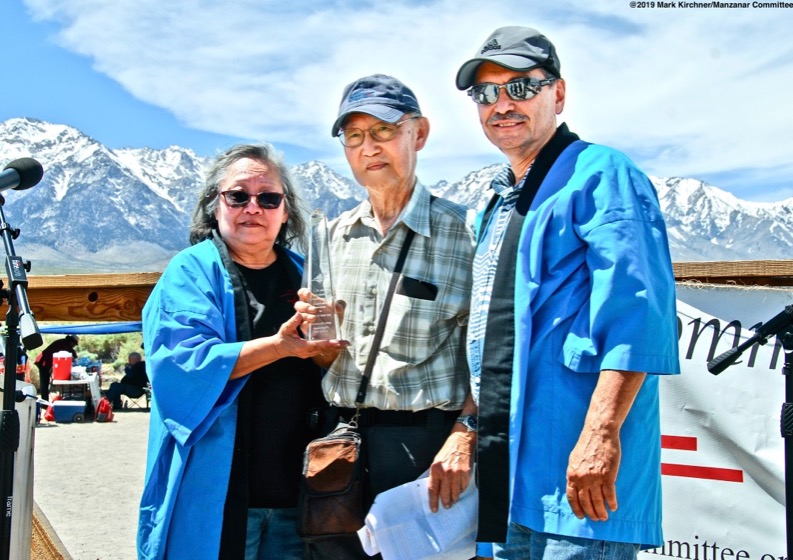 The following was originally published in the printed program for the 49th Annual Manzanar Pilgrimage, April 28, 2018.

In 1942, we were thought to be unassimilable and a threat to American society. Time and historical fact has shown otherwise, but we know the consequences of being seen as a statistical mass of people who were forced to exist outside the framework of America’s laws.

Seeing people as individuals can make a difference in this world. One situation I remember was brought to NCRR’s attention during our early years in the redress campaign. We were approached by our fellow activist, Sue Kunitomi Embrey, who had received the shocking news that Estelle Ishigo was found alone and abandoned, living in in a dingy basement in Echo Park. Sue was making the rounds, spreading the word, so that the Japanese American community might be able to help her.

Sue and I were both former members of JACL’s Progressive Westside Chapter when we voted to support the grape strikers. I also recall the meetings held at her home in Echo Park as a member of the original Manzanar Committee.

Estelle, now a much-revered artist, has her work on Heart Mountain and her difficult life in the aftermath available to view through various programs at the Japanese American National Museum. Estelle married Arthur Ishigo in 1929, much to the consternation of her family, who disowned her. Due to the American miscegenation laws, they had to go to Mexico to get married. She followed Arthur into Heart Mountain, and like Ralph Lazo at Manzanar, wove herself into the fabric of the people’s life.

A poignant picture taken at that time is one of Estelle, standing with the camp band, seemingly a lost waif in uniform. She was considered part of the people by the internees of Heart Mountain as she shared their misery and the brutal conditions of camp. As an artist, she painted scenes of people braving the blizzard like snow to collect coal to heat their stoves in the winter to survive.

Like other internees, she vanished once the war ended and the camps shut down only to turn up decades later in the bowels of Los Angeles. Her husband, Arthur, had died after they left Heart Mountain. They had both toiled in the fish canneries while living in dingy trailers like so many other former refugees from the camps.

Confined to a wheelchair, she was still radiant with her smile, so happy to be found and embraced again by people that took her in at Heart Mountain. I had the pleasure of seeing her at community events, knowing the question of “who belongs, and who doesn’t,” was answered for her. To us, she was a musician, an artist, an internee from the camps! She was someone who had become part of our community.

At the 2018 Day of Remembrance Program at the Japanese American National Museum in Little Tokyo, a segment of the program dealt with the subject of “who belongs, and who doesn’t.” A high school student appeared, who, fearing deportation, was not willing to identify himself. Listening to the story of his anguish at the prospect of seeing his family torn apart, I wish I knew his name so that he could be identified as “someone.” He had no one to speak on his behalf and no one to claim him.

He will, in all probability, disappear into the statistics of the millions of “deportable” persons, all unwanted by those who favor anti-immigrant policies. By appearing in public, he was desperately trying to save his family. To most in this country, he is a statistic, a mass of people outside the law, much like we were in 1942. Unlike Estelle, we may never know of this young man’s fate, nor be able to come to his aid.

In this Pilgrimage to Manzanar, it would be good to do at least one thing that Sue Embrey did. She opened up her heart. She found a place for someone like Estelle. Were Sue still with us, she would be a strong advocate for people like our student. We need to be accepting and think about finding a place for people fighting desperately to belong to our world. This country might be the only place he has even known! We should not get taken in by those so lacking in compassion that they live to throw people away! Let us show that, as Americans, we value welcoming people and that we believe in seeing them as individuals! Let’s not be part of those who want us to build an even bigger wall! A wall like that will be a monument to stupidity and reminder to me of my time spent at Manzanar!

Born in Los Angeles’ Little Tokyo, Jim Matsuoka, 85, was among the 11,070 Japanese/Japanese Americans who were unjustly incarcerated at Manzanar during World War II. Since then, he has worked as a union representative, in higher education, and as a long-time community activist and mentor. He was one of the 150 people who participated in the first organized Manzanar Pilgrimage in 1969, and was one of the leaders of the National Coalition for Redress/Reparations (NCRR; now known as Nikkei for Civil Rights and Redress) during the successful movement for redress and reparations in the late 1970s through the 1980s. Matsuoka received the Manzanar Committee’s Sue Kunitomi Embrey Legacy Award in 2018.