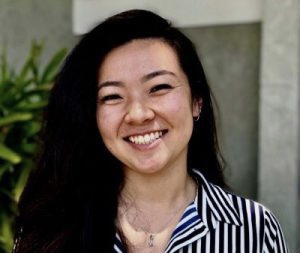 In the coming weeks, the college students who participated in our annual program, Katari: Keeping Japanese American Stories Alive, will share their thoughts about this year’s program.

Katari, a program of the Manzanar Committee and the Manzanar National Historic Site, is in its fifth year, working to give young people some of the tools they’ll need to help others learn about the forced removal of over 120,000 Japanese/Japanese Americans from their homes and their unjust incarceration in American concentration camps, and other confinement sites, during World War II.

In this installment, Brooke Oto of the California State University, Fullerton Nikkei Student Union shared how the program impacted her.

Thankfully, I’ve had the opportunity to attend the in-person Manzanar Pilgrimage before the COVID-19 pandemic. Through the Pilgrimage and Manzanar at Dusk, I learned more about Japanese American Incarceration during World War II than what the watered down history books in K-12 schools taught.

Walking the Manzanar National Historic Site gives you a sense of what camp life may have looked like, but Katari helped me create more of an image of some peoples’ lives.

Fast forward to college…I joined the Nikkei Student Union at Cal State Fullerton, and through this organization, I learned more about my culture, and I started to care about learning more about my family history. However, by the time I reached college, my incarcerated grandparents had passed away, and my other grandparents were living on Oahu in Hawai’i, and were not among the relatively few Japanese Americans from Hawai’i who were incarcerated. So unfortunately, I missed out on being able to hear their stories.

The first topic we talked about for Katari was, How We Do History. In this portion of Katari, we dove into how history is based on interpretation, and when I was reminded that no person would have the same memories of an event, it made me realize the importance of, not just hearing one story and going along with it, but instead, listening to multiple accounts so they can help you get a more well-rounded picture of what peoples’ experiences were like.

One Camp, 10,000 Lives; One Camp, 10,000 Stories, is a quote that the Manzanar National Historic Site reminds us of. Because of everyone’s intersectionality, there are so many different recollections of an experience. This was a perfect opening for the rest of the program, as we heard oral histories from those who were incarcerated in the camps. I was reminded that these are just a few of the 120,000 stories.

Another takeaway from Katari was when we talked about a phrase in Japanese that was so common among the incarcerees: shikata ga nai which means “it cannot be helped.”

It was inspiring to see how those who were wrongfully accused and were stripped of their rights and lives continue to live on and make the best out of nothing. We talked about the types of resistance that the incarcerees showed. I found it interesting that resistance wasn’t displayed through violent or harsh acts, but instead, through the expression of emotions through art and pieces that show their resistance—art that showed that, even in these oppressive situations, they still rose above and showed they would not be silenced.

The Katari program helped me learn and understand more about the endurance and resiliency that Japanese Americans had to have during World War II. Hearing and seeing oral histories made this history more “real,” as I had faces to connect the story to.

Although I learned so much from Katari, I know this is just a sliver of history. I am encouraged to continue learning more about my history because of this program, and I hope that this program continues to educate and attract those who want to learn more about Japanese American history.

A native of Torrance, California, 22-year old Brooke Oto is a January 2022 graduate of California State University, Fullerton, where she studied Public Health, with a minor in Biology. She served as Vice President of the CSUF Nikkei Student Union, as well as their Intercollegiate Nikkei Council Representative. She also served on the 2021-22 Manzanar At Dusk Organizing Committee.