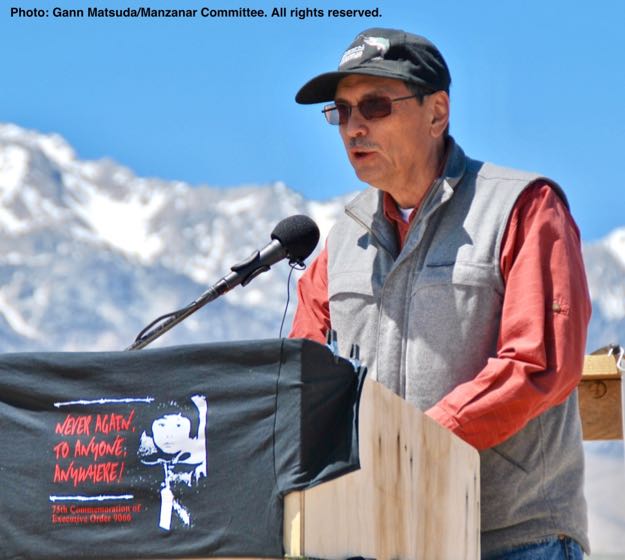 In the days and weeks leading up to Saturday, April 29, the day of the 48th Annual Manzanar Pilgrimage, the phone calls and e-mails poured in. There was no doubt that 2017 was the 75th year since our families, our community, were forced from their homes into horse stalls and barracks sparked interest in this year’s Pilgrimage.

People in their 80’s and 90’s, who had never been on a Pilgrimage before, called and told me their personal stories. Others were matter-of-fact: “Just the details on how to get to Manzanar,” some said. “Have to go before I cannot,” they’d say. Each and every conversation was meaningful.

One call came in that shook me. It was from a woman who called from Maine. She said that she saw a copy of National Parks Magazine and read an article about the 47th Annual Manzanar Pilgrimage. She said, “I know about Manzanar. I went there as a child. You see, my mother and father drove to Manzanar to visit my mother’s dear friend, Mrs. Ogata.”

I swallowed. I didn’t have the courage to tell her one of the graves in the cemetery was for baby Jerry Ogata. I don’t know if that was her mother’s friend’s baby. I don’t know if she made it to the Pilgrimage. I know she planned to and I hope she did. I hope she offered a flower for all those buried at Manzanar and at the other confinement sites in our country.

People came to this year’s Pilgrimage for many reasons. But I have no doubt that the events rocking our country were on everyone’s minds. I know for all of us in the Manzanar Committee, those who were on stage that day, and almost everyone I spoke with, the increase in anti-immigrant, anti-Muslim racism and the constant calls to vilify and attack people of color, the LGBTQ community, and so many others, had us all more than a bit worried. I’m sure that drove many to the Pilgrimage.

The Pilgrimage has ebbed and flowed over the years, but when an important struggle or battle concerning redress and reparations was unfolding, the Pilgrimage became a place to rally and educate. The Pilgrimage had educational speakers and almost always had a call to action. In the early years, the Pilgrimage (in 1975 at Tule Lake and Poston as well) served to “talk story.” Survivors of camp told their stories about what it was like to be carted off to a desolate camp by the armed forces of your country of birth, or of your choosing. The Pilgrimage educated the Sansei (third generation Japanese Americans), Yonsei (fourth generation Japanese Americans) and shin-Nikkei (Japanese Americans who are descedents of more recent immigrants from Japan) about what happened and empowered us all to organize and demand justice.

I think the more than 2,000 people who traveled to Manzanar on April 29 experienced a “traditional” Pilgrimage. There was education, reflection and calls to act. Pat Sakamoto’s story of her mother and how camp and the loyalty questionnaire tore her family apart was the story about camp. Alan Nishio, while accepting the Sue Kunitomi Legacy Award, called on everyone to rise to the demands of the times and fight to defend our democratic rights. By the way, the other name for that award, Baka Guts, was a term coined by my 102-year-old uncle, Jack Kunitomi, and his friends in the Oliver Club on the streets of Little Tokyo in the 1930s. It was meant to praise someone’s courage and determination on the gravel strewn football field.

Alan said we all need some baka guts right now, and I couldn’t agree more. Warren Furutani’s powerful reminder that the power of the people is the most important check and balance in our democracy was right on time. California State Assemblyman Al Muratsuchi’s remarks gave me confidence. #vigilantLOVE’s poem, Instructions, was powerful and many said was the best performance art ever at a Pilgrimage. The crowd of more than 2,000 people encouraged me.

The presence of our Muslim sisters and brothers gave me confidence as well. I know the struggle against Islamophobia will be long and difficult. But I was proud that we, as a community, are taking it on without hesitation. The work and presence of the #vigilantLOVE contingent was incredible.

Over the years, I have watched how the Pilgrimage has changed. There have been big crowds before—1,500 in 1973 to witness Kado-san install the bronze plaque designating Manzanar a State Landmark and declaring “racism and economic greed” drove the our families into “concentration camps.” The early days were dominated by Nisei (second generation Japanese Americans, children of the Issei, who immigrated from Japan) and their families, along with many civil rights allies and friends.

These days, the Nisei are few and far between. As I looked out over the crowd, I saw many familiar faces. But as I began to speak, the faces of those who were not there flooded my mind. Tak Yamamoto, Grace Harada, Marjorie Sperling, Michiko Ito, Hide Kunitomi and Koo Sakamoto, and of course, my mother, Sue Kunitomi Embrey. These were the stalwarts, the backbone of the Manzanar Committee for decades who could smile, and without bitterness, describe what it was like to be sleeping in a horse stall or living behind barbed wire with no Constitutional rights to a reporter. I wished they could have celebrated the 25th anniversary of the Manzanar National Historic Site with us.

But I saw hundreds of new faces, young activists, and students from different communities watching intently as Pat described her mother’s view that when it came to camp there is nothing good to talk about, as #vigilantLOVE performed, and as Warren described searching for Manzanar back in 1969.

Later that evening, at Lone Pine High School, as hundreds of people packed in for Manzanar At Dusk, I thought about how the event has grown from a small gathering at the old American Legion Hall in Independence to hundreds of participants, about 550 this year, shattering the previous attendance record of 360.

Manzanar At Dusk seems to be a highlight for many. In 1969, and for years, when young people, mostly students, came to discover, hear and uncover what happened to their families, they could hear and talk to survivors at the Pilgrimage. That is more difficult these days. But Manzanar At Dusk has done incredibly creative things and provides a venue, a way to understand what happened, and why.

For many it seems, Manzanar At Dusk is particularly engaging, more intimate, and helps build community in ways the Pilgrimage cannot. Manzanar At Dusk always feels safe, energized and supportive. I’m amazed at the creativity and openness on display. I’m always impressed. A bit jealous, too. Activism is much more supportive and warm these days.

I’m proud our parents didn’t just accept the apology and go home. I’m proud that we, as a community, remember what happened and why. I’m most proud that the 48th Annual Manzanar Pilgrimage and the 2017 Manzanar At Dusk program showed that we understand that we have a special obligation, that we have a duty to stand up, again and again, for the civil rights of all people whenever they are threatened.

Bruce Embrey is Co-Chair of the Manzanar Committee. He writes from Los Angeles, California.