INDEPENDENCE, CA — With the 25th Anniversary of Manzanar becoming a National Historic Site (March 3, 2017) being commemorated this year, and with the much more significant milestone, the 75th year since President Franklin D. Roosevelt’s signing of Executive Order 9066, also being commemorated, the Manzanar National Historic Site continues to work on bringing two new exhibits online.

Work continues on a classroom exhibit (for more details, see “What’s New At Manzanar NHS: Classroom Exhibit Is Taking Shape”), which will be housed in the Block 14 barracks.

As of this writing, mock-up panels for the exhibit have been installed. But also in the works is the historic replica of the Block 14 women’s latrine.

Construction was completed in October 2016, but interpretive materials, such as text panels, will not be completed until the classroom exhibit is finished. However, the latrine has been open to the public for a few months now.

“Everything I’ve heard from former incarcerees is that nothing else was more dehumanizing than having to go to the bathroom in the latrine, communally,” said Manzanar National Historic Site Superintendent Bernadette Johnson in an October 2016 interview. “One former incarceree, in an oral history, summed it up by saying that, even as a teen-age boy, it was so difficult to go to the bathroom in that context because it was dehumanizing. He said that [this part of the Manzanar story] must be told. It has to be shown.”

“When you actually have the structure and you see how small it was for 14 barracks, when you think about all the people in one block having to go to one men’s latrine or one women’s latrine, and what that had to feel like, nothing else here, in my opinion, and from what I’ve heard from former incarcerees, speaks to that lack of privacy like the latrines do,” added Johnson. “This is a real opportunity to have visitors experience what that felt like.”

Indeed, the latrine is already becoming one of the Manzanar National Historic Site’s most powerful, most thought-provoking and most educational features, even though no interpretive materials are present yet, other than an exterior sign that identifies the structure.

“It’s not a very big building,” Lynch added. “But when you go in there, most of us are not accustomed to seeing rows of toilets that are open. Throughout our oral history program and in people’s memoirs, there’s a lot of amazing quotes about the latrines. Just last month, I was doing an oral history interview with a woman who is almost 101 years old, and I asked her, ‘what do you want people to know about the latrines,’ but what she thought I asked was, ‘what do you think or feel?’ What she said was, ‘I want people to feel remorse. I want people to see what they did to us.’”

“It was amazing, because people usually say, ‘I want them to understand that we had to sit, side-by-side, that we didn’t have any privacy. But that whole idea of what you want visitors to feel, I thought, was really profound, and I think it’ll bring our interpretation to a whole new level.”

To be sure, the demoralizing, dehumanizing experience the incarcerees faced when they had to use the latrine, which was also a cultural affront to them, was burned into the minds of every incarceree and it is a memory that continues to have an impact on them more than 75 years later.

“In most situations, you’d think that interpreting a bathroom would not be of that much interest,” Lynch observed. “But the fact that we’re [now] 75 years later and it’s something that stands out in people’s memories and it’s something they continue to bring up, tells you how important that is, to stakeholders and to the National Park Service, as well. We want to be able to convey what daily life was like here.”

“There are a lot of universal experiences that people had in camp here,” Lynch added. “People fell in love. They had their hearts broken. People died. Babies were born. But the one thing we know that every single visitor who comes here has in common is that we all use the bathroom. I think it’s going to be very powerful. It’s a great way to show life in a block.”

Visitors who served in the military might think that rows of toilets without partitions isn’t a big deal since that’s what they had in their latrines—the Manzanar latrines were based on those found at military bases.

But Manzanar wasn’t a military base. These were civilians.

“Especially if people served in the military, they’d say, ‘I was in the service, and that’s what we all did,’” Lynch noted. “But the difference is that this was men, women, children. Old and young.”

Women were especially impacted by the lack of privacy in the latrines, given the fact that most women had more than just the routine bodily functions to deal with in the latrines.

“One of the reasons we wanted the women’s latrine was that men and women both talk about it,” Lynch added. “But I think the women talk about it a lot more.”

Despite the fact that relatively few historic photos of camp latrines are available, the Manzanar latrine is as historically accurate as possible, right down to the toilets.

“We are trying, even down to the toilets, to be historically accurate,” said Lynch. “We want, when people walk in, especially those who were here—it’s burned into their memories.”

Ten historically accurate toilets are part of the latrine exhibit.

“I never thought, in my career, that I would be excited about interpreting a toilet,” Lynch said, with a grin. “But it means a lot to a lot of people.”

Even without any interpretive materials, the women’s latrine itself already says much of what needs to be said to visitors.

“My feeling is that the latrine won’t be as heavily interpreted as, for instance, the classrooms, where you’re trying to cover the experiences of thousands of people,” said Lynch. “[The latrine] speaks for itself. I’m hoping that we’ll have some oral histories in there, but it really is something where all you have to do is walk in and see.”

“The challenge is to make sure no one ‘uses’ it,” added Lynch. “It’s not going to be operating.”

10 photos by Gann Matsuda; ©2017 Manzanar Committee. All rights reserved. Click on any photo to view a larger image, and to scroll/click through the gallery.

September 2016: Initial work on constructing an historic replica of the Block 14 women’s latrine at Manzanar National Historic Site. In this photo, the historic concrete slab foundation is being reinforced with rebar to meet current seismic standards. 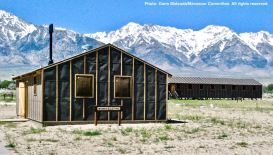 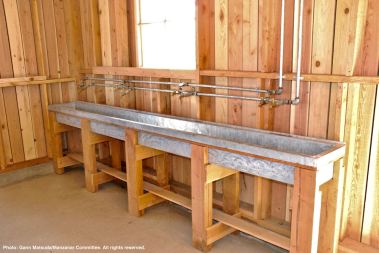 One row of communal toilets in the Block 14 women’s latrine. Note the absence of partitions

One row of communal toilets in the Block 14 women’s latrine. Note the absence of partitions 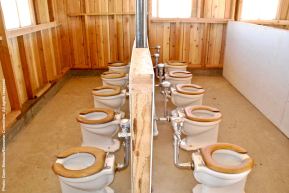 Communal toilets in the Block 14 women’s latrine. Note the absence of partitions

Whatever you do, DO NOT USE the toilets in the Block 14 women’s latrine!

2 thoughts on “New At Manzanar NHS: You’ve Got To See The Historic Women’s Latrine”