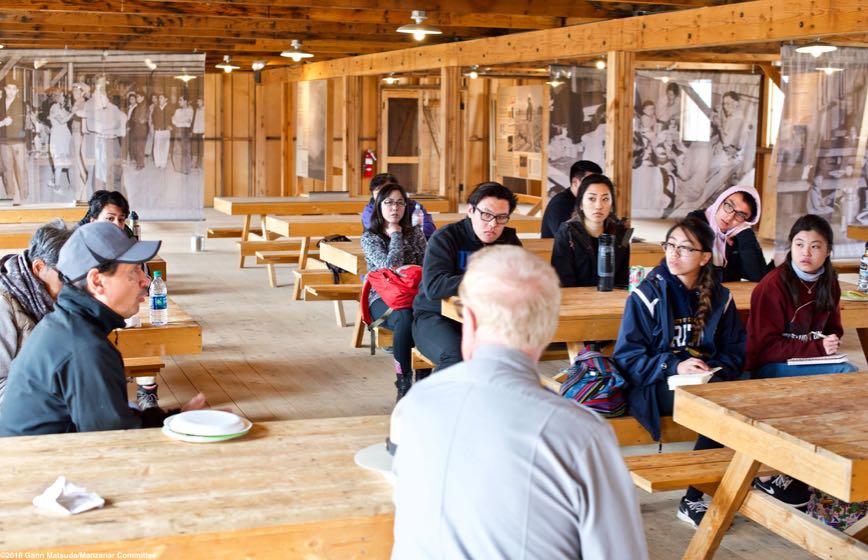 LOS ANGELES — On September 3, the Manzanar Committee announced the launch of Phase II of their pilot project aimed at educating college-age youth about the unjust incarceration of over 120,000 Japanese and Japanese Americans during World War II, and providing them with tools to help them teach that critical history to others.

The Committee also announced the launch of a crowdfunding campaign to raise the necessary funds for the project.

Phase II of the pilot project begins with a new name, the Japanese word, Katari, which, in this context, means to tell stories.

In Phase I, college students from the aforementioned student organizations traveled to the Manzanar National Historic Site, located approximately 230 miles northeast of Los Angeles in California’s Owens Valley, where they engaged with rangers and members of the Manzanar Committee for two days of intensive, place-based, experiential learning at the site of the first of the American concentration camps where Japanese Americans were locked up behind barbed wire during World War II, one of the darkest chapters and one of the most heinous violations of Constitutional rights in American History.

“From our perspective, this first weekend with students at Manzanar could not have gone much better,” said Manzanar Committee Co-Chair Bruce Embrey. “The times we’re living in can be both discouraging and unnerving. But seeing the way these young people took in the tremendous amount of material we gave them, the way that they engaged the rangers, members of the Manzanar Committee, and each other, not to mention how they were able to critically reflect on all that was thrown at them, was really inspiring. They were able to relate what, on the surface, looked totally disconnected to their present-day reality and make the connections to their own life experiences.”

“It is one thing to see photos and read articles online or through a textbook, and it is another thing to experience something first-hand,” said Erica Wei of the UCSD Nikkei Student Union. “By participating in this project, I got to see Manzanar with my own eyes and hear the stories of those who were incarcerated with my own ears. From the harsh weather, to almost inedible food, to the extreme lack of privacy, I was moved to tears several times and ached for the community who lost their homes and whose families were broken apart. It became so much more impactful, emotional, and meaningful to have this hands-on participation during this weekend.”

“As a shin-Nisei (second generation Japanese Americans whose parents are recent immigrants from Japan), I always felt out of place within the Japanese American community in Los Angeles,” said Moet Kurakata of the Nikkei Student Union at UCLA. “But this trip made me realize that no matter what generation, age, skin color, or whatever form of identification, Manzanar is a place that impacts you as a member of society.”

“Hearing the stories of the members of the Manzanar Committee, the park rangers, and fellow students made me realize that Manzanar has so many aspects that reflect human life,” added Kurakata. “This trip has helped me to identify with Manzanar, something I did not feel last year at the Pilgrimage.”

“This pilot project is an example of the Manzanar Committee’s continued commitment to engage young people in the preservation of community history, identities, and memories,” said Manzanar Committee member Wendi Yamashita, Ph.D., an Assistant Professor, Center for the Study of Culture, Race, and Ethnicity, Ithaca College who also serves as Co-Director, Katari. “Teaching and having conversations about what happened to Japanese Americans during World War II is important to understanding, not only how the current political climate came to be, but also how we can resist and support one another. Stories and storytelling are a form of resistance.”

In Phase II of this project, roughly twelve students will make the trip to Manzanar National Historic Site. More former incarcerees will be invited to participate in order to deepen and enhance the students’ learning experience. After the weekend, the partners will then begin the process of determining the feasibility of expanding the project into a permanent one that would reach more college students and more campuses across Southern California.

“Students and young people have always played a central role in the struggle to understand and to educate people about Executive Order 9066 and the forced removal,” said Embrey. “In 1969, the first community-based Pilgrimage was led by young third and fourth generation Japanese Americans, and throughout the decades-long struggle to win redress, students lent their skills and resources to the work initiated by those who had endured camp.”

“Today, students and young people continue to play a vital role in both remembering and deepening our understanding of what happened to our community and families 76 years ago,” added Embrey. “Young people are continuing the work of their parents, grandparents, and family members in telling their unique stories of life behind barbed wire. But it has become apparent that we need to do much more to educate our younger generations in order to ensure that they can continue to teach others about this history so that what happened to our community never happens again, to anyone, anywhere.”

The Manzanar Committee has launched a $5,300 fundraising campaign to help defray the costs of food, lodging and transportation for the students and other participants in the project, along with some supplies. Donations can be made via GoFundMe.com at https://www.gofundme.com/katari-jastories and may be tax deductible (consult your tax advisor).

The Manzanar Committee is dedicated to educating and raising public awareness about the incarceration and violation of civil rights of persons of Japanese ancestry during World War II and to the continuing struggle of all peoples when Constitutional rights are in danger. A non-profit organization that has sponsored the annual Manzanar Pilgrimage since 1969, along with other educational programs, the Manzanar Committee has also played a key role in the establishment and continued development of the Manzanar National Historic Site. For more information, check out our web site at https://manzanarcommittee.org, call us at (323) 662-5102, and e-mail us at info@manzanarcommittee.org. You can also follow the Manzanar Commitee on Facebook, on Twitter at @manzanarcomm, on Instagram at @manzanarcommittee, on Pinterest and on YouTube.