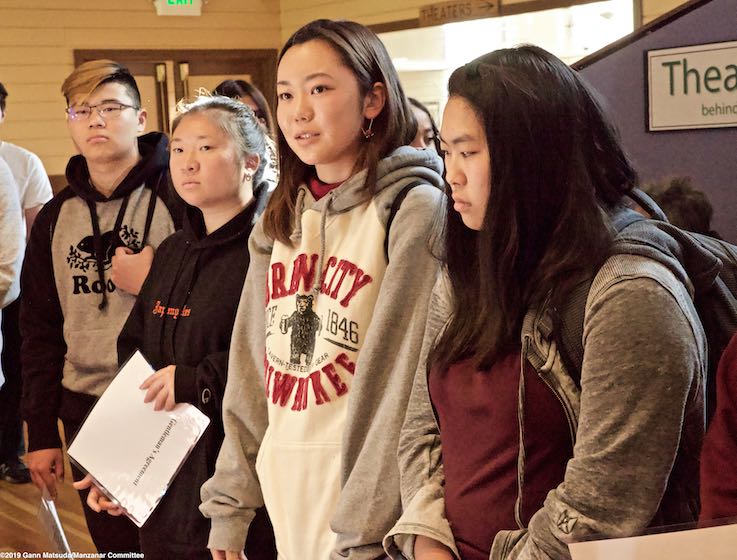 In the sixth installment of reflection pieces written by the students who participated in the 2019 edition of Katari: Keeping Japanese American Stories Alive, November 2-3, 2019, at the Manzanar National Historic Site, one of our students wrote about how the Katari trip resulted in a sea change in her thinking about how to deal with a very important question.

The Katari trip to the Manzanar National Historic Site last month made me confront two fundamental parts of myself: The value that I hold in storytelling and my continued struggle with self-identity.

For my entire life, I have listened to and told stories. I have been fascinated by stories, both fictional and real. As a child, I would pester my parents to tell me stories about their younger lives.

There is something different about hearing someone speak their truth. I continued this passion into the present, as a filmmaker. While it is my job, as a filmmaker, to tell stories, there was one thing that I despised. I always hated, when we were learning about tragic, unimaginable events in our human history, the teacher would ask, What would you do in their shoes?

When the same question was posed to me at Manzanar At Dusk last year, I thought those same things. I simply answered, “I don’t know,” along with the rest of my group. In our initial meetings, as the Manzanar At Dusk organizing committee, I questioned the morality and validity of that question. Wouldn’t it be rude to ask such a question in front of a former incarceree who experienced these things? How could we ask people to answer that question at our event when we cannot fully understand? During the Katari trip, I continued to think about these things, until we went over the loyalty questionnaire.

My parents are Japanese immigrants, and I grew up leading a double life. At home, I was Japanese. I did everything a kid in Japan would do. At the same time, I was American. I went to a school where no one looked like me or spoke like me. I asked my mom to stop packing me Japanese food for lunch, and have me bring sandwiches instead so I could fit in. For 13 years of school, I felt constantly torn between two different universes.

When I got to college and joined the California State University, Long Beach Nikkei Student Union, it was my first opportunity to learn, side-by-side, with people like me. People who knew what it was like to lead the double life I had led for 13 years in school. At college, my two different lives finally merged and I started to find a balance between celebrating both cultures in NSU, and I started becoming more involved in the Japanese American community.

During the Katari weekend, I was one of the only people who had no blood ties to Manzanar, or any of the other incarceration camps. As I previously mentioned, my parents immigrated from Japan, making me a shin-Nisei. When I told my parents about Katari, they didn’t understand why it was so important to me and they didn’t see the value in revisiting a painful history that I had no direct connection to.

Looking at the loyalty questionnaire brought up complicated feelings and bitter memories for me. Every year, I dreaded the day we learned about the incarceration camps. I could feel everyone’s eyes on me, quick to look away when I raised my head. My family had no connection to the incarceration, and yet they knew I was Japanese and that was the only thing that mattered.

The Katari trip allowed me to ask the hard question, “What would you do in their shoes,” which was an essential question for me to learn more about who I am and my Japanese American identity. Being at Manzanar—feeling the sun glaring down at us, seeing the unforgiving landscape, hearing Yoshiye Okimoto Hayashi, Pat Sakamoto and Min Tonai (the former incarcerees who came to speak to us) talk about their memories, seeing the incredible work the park rangers put into preserving the history—I couldn’t stop myself from imagining what the people there thought, how they felt, and how it affected them.

We need to ask this question and imagine the unimaginable because without asking these hard questions we lose empathy. If we don’t confront the uncomfortable situation of the reality of these events, we become indifferent. Listening to recordings, learning the facts, and reading passages can only do so much. Being at Manzanar, with the people who lived a part of their lives there, and listening to their memories, emotions, and thoughts, is a privilege that I wish I could extend, but unfortunately, I cannot. As the voices of the people who can truly attest to what happened at Manzanar dwindle away, it becomes increasingly urgent that we try to understand, empathize, and imagine something that isn’t understandable and is unimaginable. The Katari trip gave me an invaluable experience where I reaffirmed the value I hold in storytelling and where I began to confront my Japanese American identity.

A 19-year-old native of Los Angeles, California (Westwood, to be exact) who was raised primarily in Hermosa Beach, California, Seia Watanabe is in her second year at California State University, Long Beach, where she is studying Pre-Narrative Production in the College of Film and Electronic Arts and is an Assistant Director in a CSULB senior film entitled, “Kamikazari,” which focuses on Japanese picture brides. Seia is the 2019-20 Culture Night Director for the CSULB Nikkei Student Union and serves on the 2020 Manzanar At Dusk organizing committee.

LEAD PHOTO: Seia Watanabe (center) is shown here with fellow students during an exercise about racist laws and anti-Asian sentiment that preceded and led up to the unjust incarceration of Japanese/Japanese Americans during World War II. November 2, 2019, at the Manzanar National Historic Site. Photo: Gann Matsuda/Manzanar Committee.