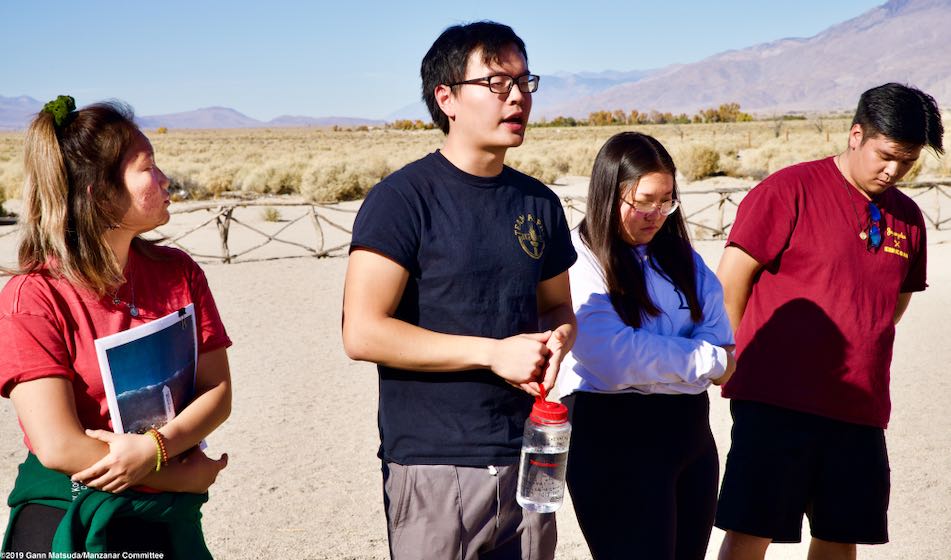 We end 2019 with the final reflection written by the students who participated in the 2019 edition of Katari: Keeping Japanese American Stories Alive. In this story, one of our students, who had a family member who was unjustly incarcerated at Manzanar during World War II, shared his thoughts on how the trip to the Manzanar National Historic Site affected him and what he learned from it.

My auntie, Cherry Uyeda, has always been a constant, supportive figure in my life. From my first grade spelling bee to all my musicals, she has always given me words of encouragement and has pushed me to pursue my dreams.

Indeed, my Auntie Cherry is the embodiment of positivity and would move Heaven and Earth to spread kindness to everybody who she meets. I admired this about her, knowing that she had gone through something as horrible as the Japanese American incarceration camps. Keeping her in my mind, I sought to learn as much as I could from the Katari trip to the Manzanar National Historic Site, November 2-3, 2019, in hopes of learning about myself and my auntie.

To say that Katari was an interesting experience undermines the complexity of the emotions that I have whenever I reflect on the two-day voyage that I went on in Inyo County, California. It wasn’t the first time that I’ve visited this arid landscape; I’ve played with UCLA Kyodo Taiko for the two previous Manzanar Pilgrimages and a performance in Lone Pine. But this return to the Owens Valley was remarkably different. I came to learn specifically about my auntie and what it was like for the Japanese American community to live in horrendous circumstances during World War II.

My biggest concern was how I represented myself and how I could learn from an experience that I could not relate to. In what way could I learn about myself if all I’m learning is about what happened to a community that I am not a part of?

Min Tonai, Yoshiye Okimoto Hayashi, Pat Sakamoto, and Bruce Embrey, alongside the phenomenal park rangers, Rose Masters and Alisa Lynch, pieced the answers together for me in a jarring manner. Immediately during the first day, we were challenged in the paradigms of how we view history and American society. Asian American history, along with the other facets of Ethnic Studies, is not well presented in core history classes from kindergarten to 12th grade. This was apparent when we had to chart the timeline of unjust laws that discriminated against Asian Americans, specifically, Japanese Americans.

From the more well-known 1882 Chinese Exclusion Act, and the 1965 Hart-Cellar Act, to other horrendous laws, such as the 1913 Alien Land Law and 1952 Walter-McCarran Act, we learned of ways that the United States Government has systematically disenfranchised Asian Americans, from a political and societal standpoint. It was in this exercise of learning about racist laws that we were shown a glimpse of the anti-Asian sentiment that preceded World War II and continued past the incarceration period. Also, Beverly Newell, an elder of the Lone Pine Paiute-Shoshone community, told us about the history of the Paiute-Shoshone people who had lived in the Owens Valley long before they were forcibly removed by the United States Army and replaced, first by white settlers and later, by the Los Angeles Department of Water and Power.

To say it was heart-wrenching to learn about the mistreatment of various ethnic groups undermines the gravitas of the circumstances, disallowing any kind of word to succinctly convey the disappointment and sadness I felt after learning about these facts. From the first hour of Katari, I was motivated to hear more testimonies and to indulge myself in this experience.

Walking around the Manzanar camp site itself was depressing. There is no beauty in the arid lands, and dust was a common visitor to the crevices of my clothing. The sun beat down harshly as we walked from one site to another, with a subtle wind being the only semblance of respite. There was a multitude of sites that we visited and I had the great privilege to learn the importance of each one. I was humbled by the mess hall, where family values were degraded. I was hopeful at Merritt Park, the place where it seemed like there was a sliver of peace in a tumultuous time. This was the place where we learned of the amazing deeds of Sue Kunitomi Embrey, a powerful activist in the fight for Japanese American civil rights and the creation of the Manzanar National Historic Site.

I was angry at Block 14 because I wasn’t previously aware of the effects of the Manzanar Riot which led up to the horrendous Loyalty Questionnaire, that tore families apart because of a “simple” question. I was dismayed at Block 31 because when Yoshiye Okimoto Hayashi mentioned that this was her home and that it was like heaven to her, I could have only thought that it would have been my hell. I was ready to fight when we visited the Manzanar Reservoir, where messages of resistance and self-love were cheekily written into the walls that the reservoir crew (made up of Japanese American incarcerees) toiled extensively.

My feelings throughout the Katari weekend fluctuated like the weather in the Owens Valley, sporadically hot and cold, angry, and sad. But my gratitude that I can live free kept increasing from one experience learned to the next.

Although I kept my emotions mostly in check at other sites, three sites caused me a visceral pain in my heart, to the point where my emotions ran rampant. One of them was the Children’s Village, also known as the Manzanar orphanage. I have never thought about the children that had been taken into camp without their parents or who had the additional trauma of losing a parent even before this period of incarceration. To know that some of the children have come back to revisit what they consider their home gave me an unknown feeling that I’ve yet to distinguish as anger or remorse. Seeing a marble on the ground and feeling it almost broke me down; I could never imagine myself losing the parents I love and being locked up unfairly by the government.

The next site was the Manzanar cemetery. It was a different, more solemn vibe that I felt compared to the other times I visited. This third visit, I fully took the time to reflect and pray for all the lives lost and for all the injustices that were never resolved for the incarcerated Issei (first generation Japanese Americans; immigrants from Japan) and Nisei (second generation Japanese Americans, the children of the Issei, born in the United States). A growing sadness built inside of me as I looked at each grave marker, and it crudely reminded me that people died in Manzanar, never to taste freedom again.

The experience that stayed on my mind throughout was when we visited the women’s latrine during our first day at Manzanar. The first thing I noticed was a row of toilets and showers without any partitions and how poorly built these bathrooms were. The insulation is terrible and the open window showed how little privacy people had. It was an awful place to be. I had the privilege of reading one of the former Manzanar incarcerees’ oral histories on these deplorable bathrooms.

It was an excerpt from my Auntie Cherry’s oral history.

The summer before Katari, I met up with my Auntie Cherry over lunch to catch up. During the conversation, I mentioned that I was going to Manzanar for a retreat, and thus began an almost two hour-long conversation where she talked about her experience before, during, and after Manzanar. Because of that conversation, I learned about her thoughts of Manzanar and how she deemed it to be a “stripping of human rights.”

I knew she hated the experience and I always admired her for her courage to be so open when speaking about her past trauma. I thought that I would be ready to learn about what she had gone through.

Katari wasn’t the life-changing experience that I expected it to be. It was more than that. It was more like a rally, akin to the one that the late Yuji Ichioka and countless others made in 1969 where they uttered, “Asian American,” reaffirming that Asians do belong in America and that they deserve to be represented, as well. It was a reminder of the injustices that exist in the world that have been long brewing in the foundations of our society, injustices which many minorities are still facing the ramifications of today that have stemmed from the time when pilgrims illegally immigrated to America. It was an opportunity to listen and to stand by what Min said: “Take action. Keep the stories of the Japanese Americans alive so that Manzanar won’t happen today,” especially considering what is happening in America today.

For me, Katari was an opportunity to honor my Auntie Cherry, to be a part of her legacy of making an impact, and to love others while fighting for others. Auntie Cherry always told me that she was proud of me and to help the community I love. I hope that I will have her strength to educate others while fighting for the rights of other disenfranchised people. I hope that I can keep Min Tonai’s vision alive of making people aware of Manzanar’s past, in the hopes that we can draw parallels of what happened in America’s past to what is happening in America’s present. But I know that I am not alone in this task, for the Katari program has not only educated me, but it has also shown me that there is support from my peers and my community.

Auntie Cherry, I hope that I can continue to make you proud.

Jason Muljadi is a third-year student at the University of California, Los Angeles, where he is majoring in Neuroscience and minoring in History. Jason is focused on a career of researching neurodegenerative diseases, but he hopes to learn more about the Asian American community to further enhance cultural literacy in the area of neurodegenerative research. Born in Jakarta, Indonesia, Jason immigrated to the United States when he was two years old and currently lives in Northridge, California. He serves as the co-Cultural Awareness and Community Service Chair for the Nikkei Student Union at UCLA and is also one of the student organizers for the 2020 Manzanar At Dusk program.